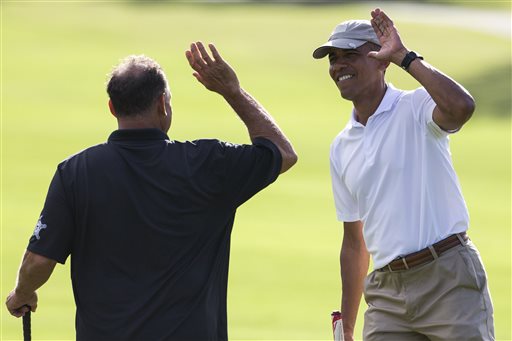 President Barack Obama, right, gives a high five to Bobby Titcomb during a round of golf at Mid-Pacific Country Club during his family vacation, on Monday, Dec. 28, 2015, in Kailua, Hawaii. (AP Photo/Evan Vucci)

Obama will also meet with Germany Chancellor Angela Merkel in what will be his fifth trip to that nation.

The White House is describing the trip as a chance for Obama to highlight the U.S. as a prime investment destination for the 6,500 exhibitors who attend the Hannover Messe. He will be the first sitting president to attend the trade show.

The White House says Obama will also use the trip to discuss negotiations on a trade pact with European Union members. The launch of those negotiations was announced in June 2013.

The White House announced the trip during Obama’s holiday vacation to Hawaii.