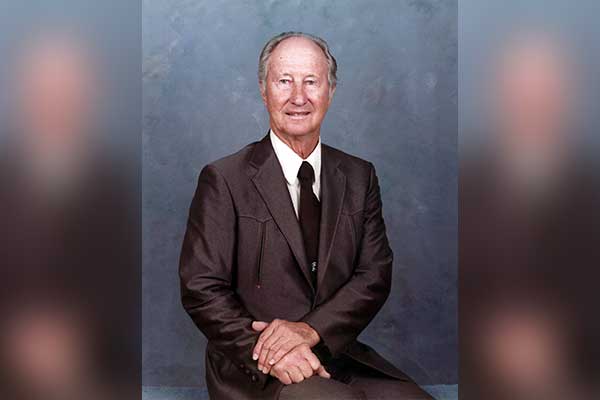 Norman Jack Pollock, 95, of Safford, passed away in the early morning hours of June 12, 2018. Jack was born in Bryce, Arizona on February 2, 1923.  He always said it was his and the groundhog’s birthday.  He spent his childhood growing up in Bryce and that is where he went elementary school.  He was brought up with his 3 brothers and 2 sisters.  Kenneth (the oldest), Jack, Lamel and Reed, Clella (the oldest) and Catherine.  Jenny Bryce Pollock and Thomas Pollock were his mother and father.  Jack attended Pima High School.  He went into the U.S. Navy before he graduated but did get his GED.

In the Navy, he was an Aviation Machinists Mate First Class, spending most of his time in Pensacola, Florida and Kaneohe Bay, Hawaii.  He loved both places very much and definitely made the most of his time there.  In Kaneohe, he rented a beach house from a woman that was Hawaiian Royalty.  When she needed a ride somewhere on the island, she always asked Jack to drive her.  He said if he died after he left Hawaii he had lived his life to the fullest.

After his time of service in the Navy, he returned to Winslow, Arizona where he was the Manager of the Sprouse Reitz store there.  That’s when he met Colleen Carver, fell in love and that were married on January 9, 1949.  They had 2 daughters, Norma Pollock (Brown) and Janine Pollock (Carpenter).

After 3 years in Winslow, he was transferred with Sprouse Reitz to their Glendale, Arizona store where they lived until 1960.  In Glendale, they bought a 2 ½ acre farm where they had a horse, a cow, chickens and rabbits.  It was a great time in the life of they family.  Upon leaving Glendale, the family moved to Vista, California where he managed the Sprouse Reitz store for a year.  They decided to return to the Gila Valley in 1961, purchased a business called the Smart Shop in Main Street and after a year renamed it to Pollock’s Western and Causal Wear.

Colleen and her mother, Gail Carver, ran the business as Jack was a traveling salesman for Fenton Western Wear.  Subsequently, they moved the business to it’s current location on Highway 70.

He is preceded in death by his loving wife Colleen, his parents Jenny and Thomas and his daughter Janine.

A viewing will be held on Saturday, June 23rd at 10:00 a.m. followed by the funeral services at 11:00 a.m. at McDougal’s Caldwell Funeral Chapel.  Interment will follow at the Pima Cemetery.

Arrangements are under the direction of McDougal’s Caldwell Funeral Chapel and Gila Valley Crematory.  Online condolences may be extended at www.caldwellfuneralchapel.com.