Nogales –U.S. Customs and Border Protection officers at Arizona’s Port of Nogales apprehended four U.S. citizens and a Mexican national involved in connection with separate failed attempts to smuggle more than 84 pounds of heroin, methamphetamine, and cocaine into the United States over the weekend.

Officers working at the Morley Pedestrian Crossing referred a 20-year-old woman for further inspection as she attempted to enter on Friday morning. A search of the woman led to the discovery of less than a pound of heroin, worth more than $7,500, which the subject had taped to her crotch.

Saturday afternoon, officers at the Dennis DeConcini Crossing referred a 51-year-old man for further inspection of his Hyundai sedan. A search by officers led to the discovery of more than 26 pounds of cocaine, worth almost $298,000 within the vehicle’s floor and seats.

Sunday, officers at the DeConcini Crossing referred a 40-year-old Mexican national man for additional inspection of his Chevrolet SUV. A canine alert led officers to find almost 46 pounds of meth wrapped around the inside of the tires. The drugs are valued at more than $137,000.

Monday afternoon, officers at the Morley Crossing referred a 26-year-old woman for further inspection after noticing her clothing appeared suspicious. A canine alert led to their removal of nearly six pounds of heroin wrapped around the subject’s midsection. The heroin has an estimated value of almost $101,000. 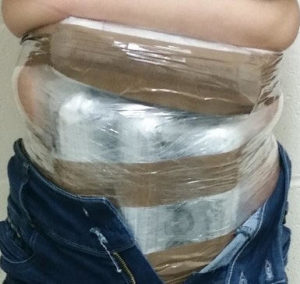 A body carrier was found to be carrying heroin

Earlier Monday, a 28-year-old man was referred for an additional search by officers at the Morley Crossing. During the search, nearly seven pounds of heroin were removed from around the man’s waist. The drugs have an estimated value of nearly $114,000.

Officers seized the drugs as well as the vehicles. All five of the subjects were arrested and then turned over to U.S. Immigration and Customs Enforcement’s Homeland Security Investigations. 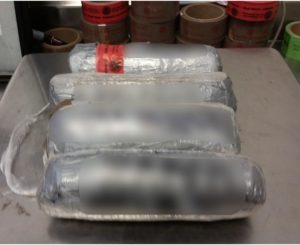 Nearly seven pounds of heroin was found on a body carrier