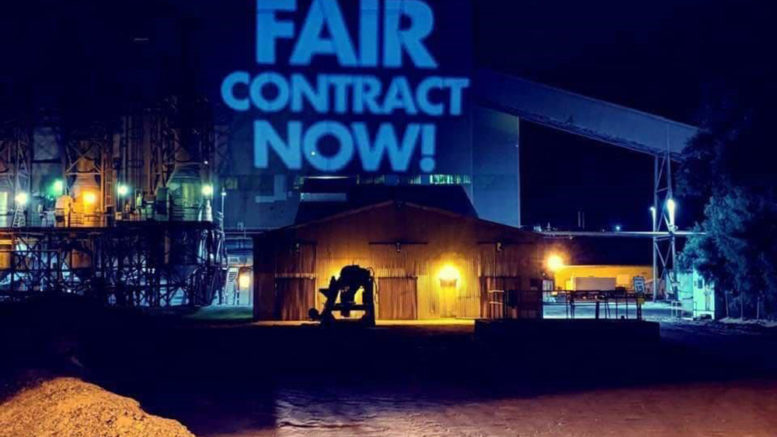 Striking members of the United Steelworkers make their demands known by projecting them on to the side of an Asarco facility in Hayden after going on strke against the company's facilities in Arizona and Texas. (Photo courtesy United Steelworkers Local 886)

WASHINGTON – Union officials said there were no talks Wednesday between them and Asarco, as a strike against the copper mining, smelting and refining company by about 1,775 workers in Arizona and Texas entered its third day.

The United Steelworkers, which represents about 1,500 workers at four Asarco locations in Arizona, authorized the strike over the weekend after rejecting a proposed contract that the union said “insulted” workers.

Repeated calls to Asarco’s national headquarters, as well as its locations in Arizona, seeking comment on either the negotiations or on the strike were not returned.

The strike came the same week that the Supreme Court let stand lower court rulings that said Asarco owed its workers millions in bonuses that the company said workers lost as part of a 2011 contract renegotiation. The union claimed that those “copper bonuses” could now be worth as much as $10 million.

One of the elements that union officials said they objected to in the latest contract talks was a proposal to make it harder for workers to qualify for the copper bonus in the future.

The unions and the company had been operating under a 2018 extension to a 2017 contract before workers voted Friday to reject the “last, best and final” proposal Asarco put forward. The unions said that nearly 77% of workers voted against the contract, with the strike taking effect Sunday night.

Manny Armenta, USW sub-district director, said the company’s last proposal would have frozen wages for another four years for most of its hourly employees, who last saw a raise in 2009. He said the contract would also have more than doubled out-of-pocket health care expenses for workers. Union officials said in a news release that members were “insulted” by the proposal.

“There’s several issues here that are not accepted by the members,” Armenta said.

He said “there’s no timeframe” for how long picketing will last, but that union members will “be out there until we get a fair agreement.”

“The company needs to sit down with us and work out a fair agreement for its employees and our members,” Armenta said. “Our members have not gotten a wage increase in 10 years.”

Picketing began Sunday evening at Asarco’s four locations in Arizona – two in Hayden, and one each in Kearny, Marana and Sahuarita – and early Monday at an Asarco refinery in Amarillo, Texas, where about 200 union members are employed.

Asarco is a subsidiary of Grupo Mexico, which claims to be the fourth-largest producer of copper in the world. The company’s website said its U.S. operations produce 350 million to 400 million pounds of copper annually.

The strike is the latest in years of struggles for the company, which emerged from bankruptcy in 2009, according to its website. A 2011 agreement between the company and the union lowered pensions for workers hired after June of that year – but neither side realized at the time that the agreement would also affect the copper bonus, which could be worth as much as $8,000 per worker.

An arbitrator allowed Asarco to maintain its pension cuts but ordered the company to pay its newer workers their bonuses. The company appealed the arbitrator’s decision, but it was upheld by judges in both the U.S. District Court for Arizona and, later, the 9th U.S. Circuit Court of Appeals.

The U.S. Supreme Court last week refused to hear Asarco’s appeal of those courts’ rulings, which meant the arbitrator’s decision stands – and with USW leaders took as a sign the company running out of options.

“Management now has no choice but to work with the unions representing its workers to determine what is owed and to pay these workers without further delay,” said Bob LaVenture, USW District 12 director, in an Oct. 7 news release.

Those issues came to a head with last week’s contract vote.

“We still don’t know when those employees will get their copper bonus,” said Rosie Chavez, regional director for the International Union of Operating Engineers, Local 428. “On different fronts, they’re frustrated with the company.”

Chavez said workers hope the strike does not go over a month, but that they are willing to stay out for as long as it takes to get what they believe they are due.