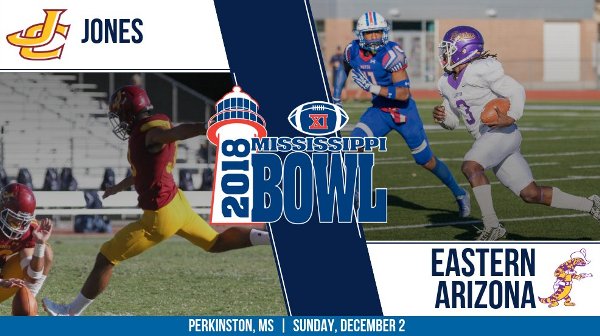 by Don Hammack and Lee Patterson

The 11th annual Mississippi Bowl will feature the top NJCAA postseason matchup outside the national championship game as No. 5 Jones College is set to play No. 7 Eastern Arizona College.

The teams will play Dec. 2 at historic A.L. May Memorial Stadium in Perkinston. Kickoff is set for 2 p.m., and the game will cap a weekend of activities for the Bobcats and Gila Monsters. No other NJCAA bowl game features two top-10 teams.

Tickets can be purchased through the game’s website, http://mississippibowl.com. Tickets are $10 for adults and $7 for students. A limited number of chairback tickets in the home grandstand (Jones side) are available for $20.

Eastern Arizona (9-2) won the Western States Football League title last weekend with a 24-17 win over No. 9 Snow. The Gila Monsters have the third-ranked defense in the country (268.8 yards).

It will be the first appearance in the Mississippi Bowl for both teams. Jones will be the fifth MACJC team to appear in the game, while Eastern Arizona is the second WSFL participant. Arizona Western played last year, as well as 2009.

The game will be broadcast live on KATO 1230 AM in the Gila Valley or online worldwide by clicking here.