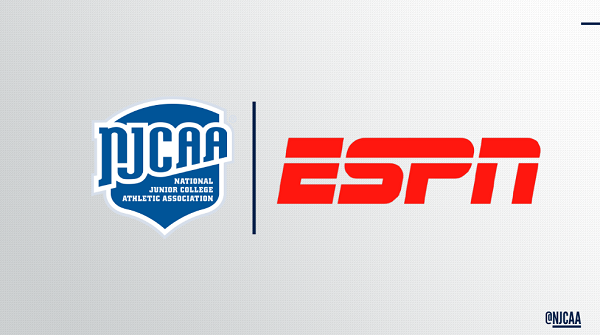 Charlotte, NC – ESPN and the NJCAA have announced a multi-year media rights agreement to begin with the 2022-2023 academic year that will include nationally televised championship games for NJCAA Division I Football, Division I Men’s Basketball, and Division I Women’s Basketball that will air on an ESPN linear network, as well as regular season content on ESPN+.

“This opportunity to work with ESPN presents a pivotal moment to maximize exposure and national awareness of the NJCAA,” stated Dr. Christopher Parker, NJCAA President and CEO. “Through ESPN and ESPN+, the NJCAA will be front and center with the leader in college sports programming.”

NJCAA member colleges that stream via the NJCAA Network, the home for the association’s digital content, will be considered for the NJCAA Game of the Week selection that will be featured exclusively on ESPN+. The NJCAA Division I Football Championship game will be nationally televised for the fifth consecutive year with the 2022 national championship game after previously being televised by CBS Sports Network.

“We are excited about our relationship with the NJCAA and the opportunities it will provide for student-athletes of community state and junior colleges,” said Dan Margulis, ESPN Senior Director of Programming and Acquisitions. “We look forward to following the storylines of the NJCAA as we continue to expand our college sports offerings.”

“The NJCAA is excited to begin this new era for our association by collaborating with ESPN,” stated Brian Luckett, NJCAA Vice President for External Affairs and Development. “NJCAA student-athletes will now have more visibility than ever on the national stage, with many of them becoming major contributors on the four-year level across all divisions, including the Power Five conferences. Sports fans will be able to witness that opportunities start with the NJCAA.”