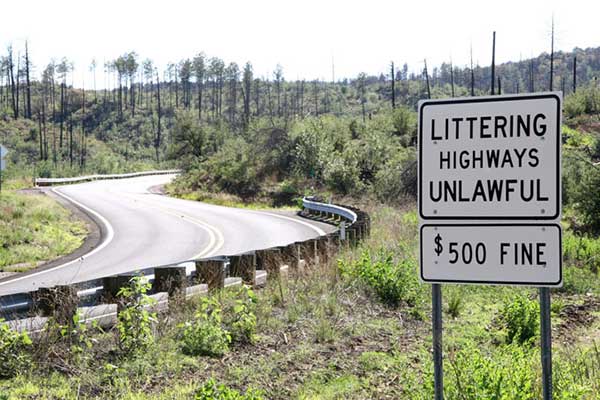 Visit Litter.AZ.gov if you see someone littering on Arizona’s highways

PHOENIX – The Arizona Department of Transportation’s Litter Hotline has a new online home that makes it even easier for the public to report drivers who throw trash out of vehicles on state highways.

Litter.AZ.gov allows witnesses to quickly share what they’ve seen through an automated chat feature. The site asks for just a few details, including license plate number, location, time and type of litter.

The mission of ADOT’s Litter Hotline, which also is available by calling the toll-free phone number 877.3LITTER (877.354.8837), is public awareness rather than law enforcement.

With information reported by witnesses, ADOT sends a letter to the vehicle’s registered owner with a reminder that littering is illegal and can result in a $500 fine when spotted by law enforcement. The letter notes that it costs more than $4 million a year to remove litter from Arizona’s highways and that roadside trash makes a poor impression on visitors and residents. The recipient also receives a litter bag suitable for an automobile.

ADOT issued more than 1,200 letters in the past year based on Litter Hotline reports.

The Litter Hotline’s new online reporting tool has another benefit: Its database will allow ADOT to better understand littering trends by tracking the location and time of each report. ADOT welcomes litter reports even if witnesses miss a license plate number. While a letters can’t go out in those cases, knowing where and when the littering occurred is helpful.