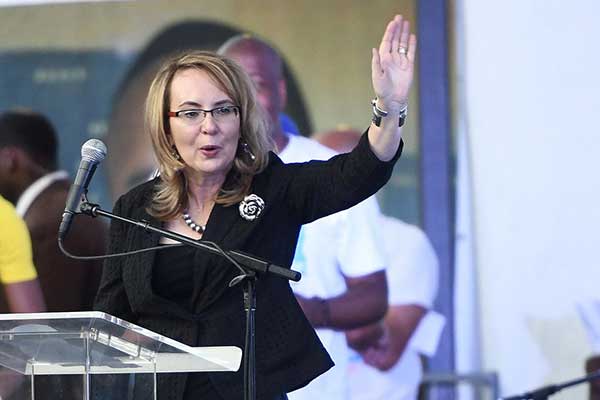 House Democrats introduced new gun legislation Tuesday, on the eight anniversary of the shooting of former Representative Gabrielle Giffords. The attack that occurred at a Safeway supermarket in Tucson, Arizona in 2011 killed six people and wounded eighteen. Giffords was meeting with constituents when she was shot in the head, but later survived the assassination attempt. The proposed bill calls for expanding background checks on sales and transfers of firearms.

Giffords released the following statement via Twitter: “I’m in Washington today, but my heart is in Tucson. Eight years ago, six lives were stolen outside a Safeway. I was shot in the head. Another 12 were injured. Though I will never make sense of that day, I’ve dedicated my life to making our communities safer.”

The bill would require federal background checks for nearly all firearm transactions, including private sales. The bill was introduced by Speaker Nancy Pelosi and other Democrats including Rep. Mike Thompson, D-Calif. Pelosi said, “Our Democratic majority will press relentlessly for bipartisan progress to end the epidemic of gun violence on our streets, in our schools and in our places of worship. Enough is enough.”

Under current federal law, only licensed gun dealers must submit background checks to the FBI before a sale to ensure that the buyer is legally able to possess a firearm. H.R. 8 would extend the requirement to include transactions between individuals, which closes a loophole that has allows firearm sales at gun shows or facilitated online. The new bill exempts exchanges between family members and allow guns to be temporarily transferred for hunting.

But any legislation will likely face heavy opposition from the Republican-controlled Senate, along with the White House that strongly believe such laws are ineffective since they don’t not deal with the root cause of violent crime.

President Donald Trump has also vowed to “protect the Second Amendment.” Yet, he did show some flexibility when he recently moved to ban bump stocks, the firearm attachments that allow semi-automatic weapons to fire like machine guns.

Speaking at the Capitol on Tuesday, Giffords acknowledged the bill’s sponsors for once again moving to expand the federal background check system.

“Stopping gun violence takes courage, the courage to do what’s right, the courage of new ideas,” she said. “Now is the time to come together, be responsible ― Democrats, Republicans, everyone. We must never stop fighting. Fight, fight, fight. Be bold, be courageous. The nation’s counting on you.

NRA spokeswoman Jennifer Baker reiterated a fundamental flaw in the Democrat’s logic by stating that universal background checks will never be universal because criminals do not comply with the law. In addition, a federal background check did not prevent Giffords’ shooting.