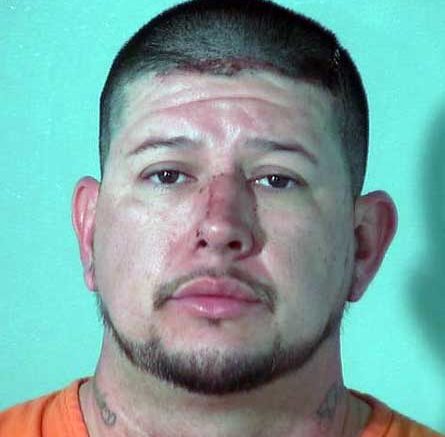 Contributed Photo/Courtesy GCSO: Michael Durazo, 33, was booked into jail for assault/domestic violence and aggravated assault on his neighbor who intervened on the victim's behalf.

Two go to hospital; one to jail

SAFFORD – A neighbor came to the defense of a woman allegedly being beaten by her husband early Sunday morning and attacked the aggressor with a tire iron after being assaulted himself.

After being aware of repeated domestic assaults against his neighbor and helping her and her children with aid when possible, the neighbor happened to be home at his residence in the 700 block of W. Keisha Lane when he witnessed his neighbor, Michael Durazo, 33, physically assaulting Durazo’s wife.

According to multiple witness statements, Durazo had locked his wife out of the house and when she opened the garage and tried to get back inside he assaulted her. The witnesses say they saw Durazo carry his wife out to the garage and strike her with a cooler.

The neighbor approached and inquired what was going on, to which Durazo allegedly told him, “none of your (expletive deleted) business and proceeded to choke the neighbor.

The neighbor went back to his own garage and retrieved a tire iron, which he then used to strike Durazo while telling him, “you’re never going to hit a woman again.”

The neighbor then began walking back to his residence and Durazo tackled him and struck him with a metal rod from a dustpan. The neighbor then struck Durazo with the tire iron a second time while trying to escape his grasp. During the confrontation between the men, Durazo’s wife had collapsed and struck her head on some rocks and was shaking in a seizure-like fashion as some people do after losing consciousness. A young girl struck Durazo’s back to try to get him off the neighbor and Durazo appeared to have no worry about his wife’s condition and allegedly said, “(expletive deleted) that (expletive deleted). I’m going to (expletive deleted) kill you.”

Officers were dispatched to the scene at about 12:37 a.m. and located the wife lying on the ground and Durazo nearby with blood running down his face.

After paramedics arrived, Durazo’s wife informed them that her husband had struck her in her head with a cooler.

Durazo allegedly told an officer that his neighbor had caused the trouble by coming over and telling him he was fed up and hitting him in the head with a pipe. He said he then swung the cooler at the neighbor, and that was likely why his wife had said she was hit by the cooler.

Multiple witnesses said there has been a pattern of domestic violence for about a year from the Durazo household, and that the wife has had to escape from Durazo multiple times and has shown signs of physical abuse on various occasions, none of which were reported.

The paramedics notified the officer that Durazo had two lacerations on his head that required stitches. Durazo initially refused transport to the hospital, but after he was placed under arrest for assault charges he had no say and had to be medically cleared before being taken to jail. He was then treated at Mt. Graham Regional Medical Center and afterward was booked into the jail for assault/domestic violence against his wife and aggravated assault against his neighbor.

The neighbor was deemed to have acted in defense of others and in self-defense and no charges were filed against him. The case was forwarded to the Graham County Attorney’s Office for review.