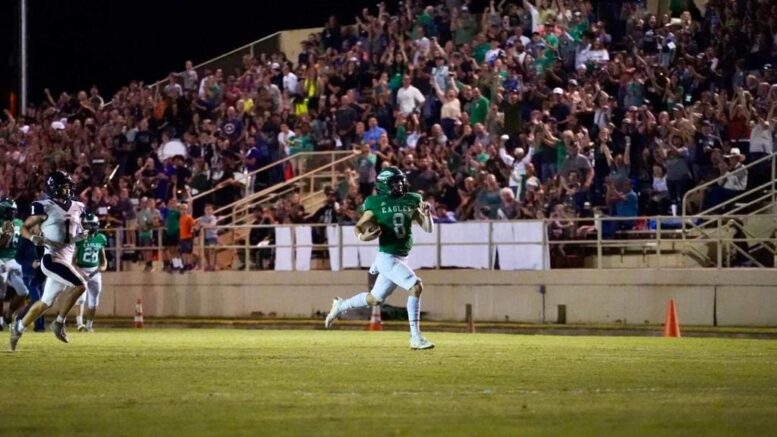 Thatcher QB Brandon Napier scores on a 68-yard run in the 1st half. Contributed Photo

THATCHER — Neither lightning nor the Pusch Ridge Lions could stop the Thatcher Eagles on the football field this weekend. The game was postponed at halftime on Friday night due to lightning within 1 mile of John Mickelson Field. The teams decided to reconvene on Saturday night at 7pm to finish the game.

Both teams scored on their opening possession on Friday night. Pusch Ridge RB Breyson Barrios started the scoring with a 6-yard touchdown run with 9:26 left in the 1st quarter. Thatcher answered right back with a 3-yard touchdown run from Ayden Bingham less than 2 minutes later to tie the game at seven.

The only other score on Friday night was a long 68-yard Brandon Napier run for the Eagles to give Thatcher the 14-7 halftime lead. As soon as the whistle blew for halftime, the school officials huddled and decided to wait out the lightning storm until 9:30pm. Every time lightning strikes inside of 10 miles, another 30 minutes were adding to the delay. At 9:01pm the game was officially suspended.

Napier opened the 3rd quart on Saturday night much the same way he ended it the night before. He scampered for a 34-yard score early in the 3rd quarter to stretch the Thatcher lead to 21-7. But on the next possession Pusch Ridge responded with a 46-yard touchdown pass from Bubba Mustain to his brother Tyler to cut the Eagle lead back down to seven.

The Eagles used the legs of Napier one last time with 5:36 left in the 3rd quarter, this time from 53 yards out to cap off the scoring with a 28-14 lead. Napier finished the night with 196 yards rushing and the three scores.

Mustain threw for 238 yards and a TD for the Lions to lead them offensively.