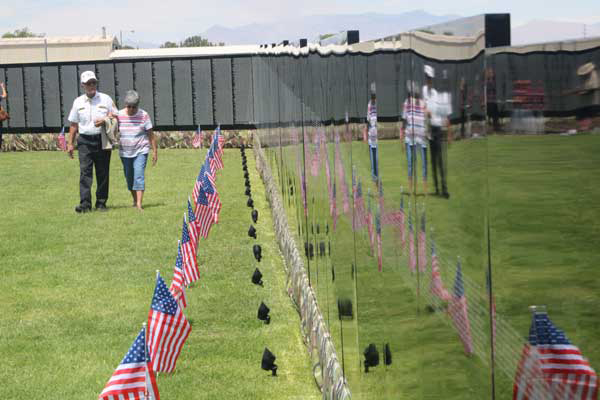 Gila Valley Honor Guardsman Richard Ortega and his hife, Theresa, walk along and look at the names inscribed on the Moving Wall, a replica of the Vietnam Memorial in Washington, D.C. Richard served with the Marines in Vietnam in 1966-67. - David Bell Photo/GIla Valley Central

THATCHER — With an opening prayer and Honor Song from the San Carlos Apache Veterans Association, welcoming remarks from Thatcher Mayor Randy Bryce and former mayor Bob Rivera, and the national anthem performed by Sharon Watkins, the Moving Wall replica of the Vietnam Memorial opened to the public Thursday morning.

“The Town of Thatcher, bless their hearts for brining the Moving Wall,” said Steve Oller, commander of American Legion Swift-Murphy Post 32 and commander of the Gila Valley Honor Guard. “It’s one of two half-size replicas of the one in (Washington) D.C. Thatcher’s Bob Rivera, Annie Reidhead and Heath Brown they really outdone themselves; it’s a remarkable accomplishment what they’ve done.”

The Moving Wall will be open 24 hours a day in Thatcher’s H. Lyle Grant Park, at the corner of U.S. Highway 70 and Reay Lane, until Monday, June 14.

“There is no cost, whatsoever, to come and view it,” Rivera said. “We will have volunteers assisting people. If they have a name, they will give them the information; they’ll tell them how to go to the panel and find their love one or their friend’s name there.”

The Moving Vietnam Wall is a replica of the memorial in Washington, D.C. It’s formed by 140 panels, measuring a combined 375 feet long and 7.5 feet tall. It’s made of synthetic granite and is engraved with more than 58,000 names.