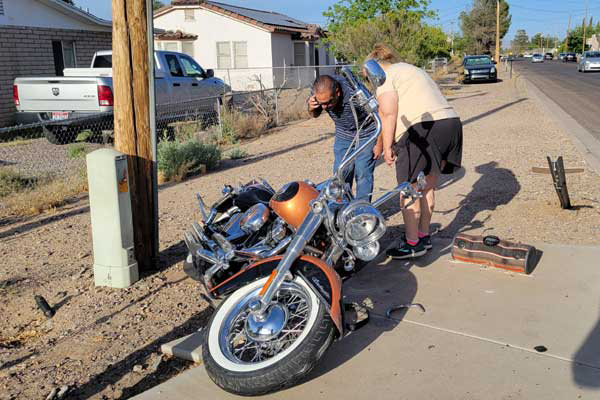 Witnesses call Safford Police and examine the motorcycle left behind by a rider who crashed the bike and walked away from the scene Thursday. - David Bell Photo/Gila Valley Central

SAFFORD — Safford Police are looking for a man who walked away from a motorcycle crash Thursday.

The incident occurred at about 5:30 p.m. in the area of Central Avenue and Relation Street. Witnesses said they saw the unidentified rider traveling westbound on Relation at a high rate of speed when the motorcycle struck the curb, putting the bike and rider on the ground.

After the motorcycle hit a street sign and came to rest, the rider got up and attempted to bring the bike upright again. When the motorcycle failed to stand, he laid it back down and gathered items into a small bag.

The man declined witnesses’ offers to call for an ambulance and the man left on foot, walking — then running — northbound on Central Avenue before Safford Police arrived.

The man was described as a Hispanic male, 30-40 years old, wearing a black leather vest. He was not wearing a helmet.

Cause of the crash remains under investigation.