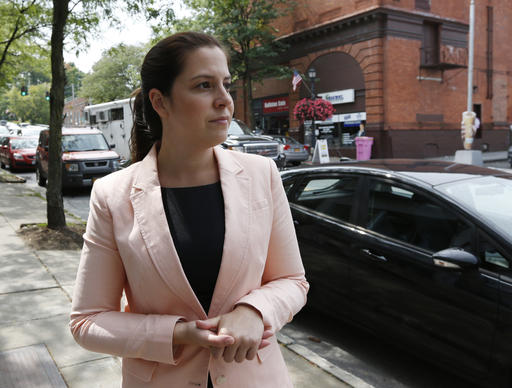 WASHINGTON (AP) — Before deciding if she’ll vote for Donald Trump, Martha McSally says she’ll spend time “determining what kind of man he is.” Mia Love says some comments by the presumptive Republican presidential candidate need “some sort of explanation,” while Renee Ellmers backs him because he’s “a problem solver.”

McSally, Love and Ellmers are hardly random women. They’re Republican members of the House, part of a sorority of five GOP congresswomen facing competitive re-election races whose reactions highlight the hard choices Trump’s provocative statements are forcing on his own party.

Each of the five must confront a question with political and personal implications: Will you support your party’s standard-bearer, knowing his history of comments about women that many consider offensive? Trump has called some women a “dog,” a “fat pig” or “flat-chested,” republished a tweet dubbing Fox News anchor Megyn Kelly a “bimbo” and accused likely Democratic presidential nominee Hillary Clinton of using “the woman’s card” to win votes.

“I think it puts all women in an awkward position,” Rep. Ann Wagner, R-Mo., whose seat is safe and is a leader of the House GOP campaign committee, said of Trump’s impact on female Republican lawmakers. “And I want to see that tone and temperament changed.”

Trump, of course, is causing angst across the GOP.

Rep. Cathy McMorris Rodgers, R-Wash., the House’s top-ranking GOP woman, said last week she is voting for Trump though “not exactly” with enthusiasm and “vehemently” opposes his remarks about women, the disabled and others.

For the five GOP women fighting to preserve their House careers, the perils are obvious. Rejecting Trump could alienate his energized supporters, jeopardizing needed votes. Embracing him might cost support from women, Hispanics and others he’s angered with incendiary comments and invite criticism for backing a man who has repeatedly insulted their own gender.

“They’re going to have to do some deep soul-searching and really think about, ‘Is Donald Trump’s Republican Party a party they feel comfortable in?'” said Alixandria Lapp, executive director of the House Majority PAC, which backs Democrats in House campaigns.

Trump campaign manager Corey Lewandowski said rather than diminishing female support for GOP congressional candidates, Trump will increase voter turnout and said a bigger factor will be Clinton’s unpopularity among men. He said there is a “complete misconception” that Trump faces problems with women, citing the billionaire businessman’s hiring of women over the years and his “security at home” campaign theme.

“Whether you’re a male or a female, what you want is, you want families to be safe. That is first and foremost,” Lewandowski said in an interview.

Most of the five GOP women in close races have been cautious when discussing Trump, instead emphasizing their focus on their district’s needs and Clinton’s vulnerabilities as a candidate.

“I don’t want to talk about that,” McSally said last week about Trump, saying she and her staff are “working our butts off” for her swing district around Tucson, Arizona. Her campaign provided a written statement saying she respects “the will of voters” but citing “concerns” about Trump’s statements about women.

“I’ll spend the next six months if needed watching closely, learning more about him and determining what kind of man he is before I decide whether to give him my vote,” it said.

Questioned about Trump, Rep. Barbara Comstock kept walking but said she has a record of “leading for women” in her Virginia district outside Washington, D.C. She steered a reporter to a previous comment to The Washington Post that Trump “needs to earn the votes of me and many others.”

In a telephone interview, Love — who represents Utah, where support for Trump has been tepid — said anyone’s offensive comment “deserves some sort of explanation.” She said she’s not endorsed Trump and wouldn’t want him campaigning with her.

Ellmers is the outlier, openly endorsing Trump. She is locked in a difficult June GOP primary against fellow incumbent Rep. George Holding and said Trump’s remarks about women won’t hurt her.

“Women are forward thinking and they don’t care what’s happened in the past. They see him as a leader, as a problem solver,” she said in an interview.

Asked if she felt a need for soul searching, Ellmers said, “Some of the worst, most heinous comments I have ever received have come from fellow women, and men.”