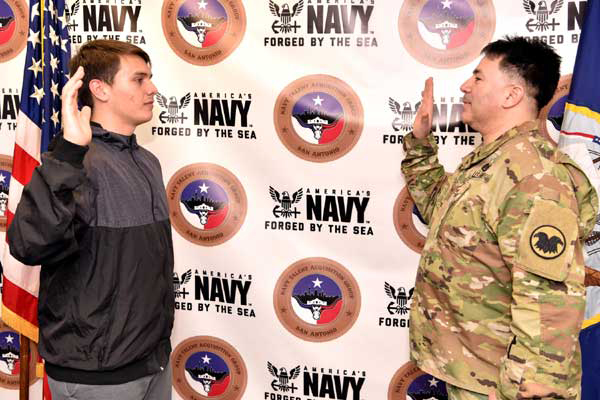 Siqueiros, who is currently attending Killeen High School in Killeen, Texas, will serve as an information system technician aboard a nuclear-powered submarine.

“I joined to support and protect the United States of America,” Siqueiros said. “I want to discover myself and figure out what I can achieve in the Navy.”

The oath was administered by his father, Army Maj. Mark Siqueiros, program manager, Warrior Transition Support Program assigned to the Solider Readiness Unit at Fort Hood. Siqueiros will be first of six siblings to join the Navy. He currently has two older siblings serving in the U.S. Air Force.

“I have high respect for them,” Siqueiros said. “I want to one day have the same opportunities afforded to them by joining the armed forces and feel important.”

In the Navy, information technology (IT) plays an important role in everything from electronic mail systems, to shipboard control systems, to Special Intelligence (SI) systems. Navy information system technicians are enlisted Sailors who engage in a broad range of responsibilities, including network administration, database management and computer hardware and software implementation.