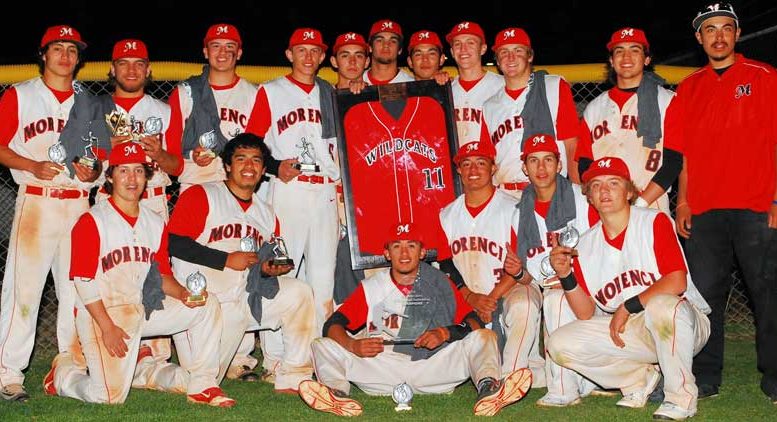 Photo By Raymundo Frasquillo: Morenci ended first in the 2016 tourney, the 13th title during 38 meets and has been a six-time runner-up.

MORENCI – “Lions and tigers and bears, oh my!” No, we are not in Kansas, this is not the Land of Oz, and Dorothy and Toto will not be dropping in.

Over the past 38 seasons, the Morenci Lions Club has hosted schools with mascots ranging from insects to big game as well as Apaches and Vikings.

The Champions and Stampede have also been in town, as have Apaches, Blue Devils, Braves, Cowboys, Redskins, Sultans, Roughriders, Trojans, Warriors, Vandals and Vikings.

This week commemorates the Morenci Lions Club’s 39th year of sponsoring a baseball tournament. The Lions welcome the Willcox Cowboys, the Pima Roughriders, the St. Johns Redskins and the Miami Vandals, along with the Safford Bulldogs, the Thatcher Eagles, the Heber Mogollon Mustangs, the Joseph City Wildcats and the Morenci Wildcats to Francis Waldorf Stadium.

The meet is the Morenci Lions Club’s largest fundraiser of the year. The service group provides a venue to make dreams come true, not only for the participants and spectators, but for those needing aid with vision problems in Greenlee County. A week-long camp for special needs youngsters ages seven and up is also financed by the group. All proceeds from this athletic meet go towards that end.

Beginning as a three-team affair in 1979, the 2017 meet will feature nine teams and 15 games from Thursday through Saturday, April 20-22, with each having a player-of-the-game selected.

“We didn’t even know if we would have a second one whenever we started,” tourney founder and then-Morenci High Athletic Director Tom Powers said. “The baseball coach at the time asked me if we could have a tournament and I said sure.”

Scheduled starts for Friday (April 21) and Saturday (April 22) games are the same as for Thursday with pairing to be decided on first day results. The championship game is slated Saturday at 6:30 p.m.

The state’s governing body opted to change the school alignments in a cost-saving move effective for the 2012 season. Enrollments plus geographical proximities were largely the deciding factors in placement, and power-ranking records accounted for the state tourney fields.

Through the 2011 season, the nine 2017 tourney entrants competed in Class 1A (Joseph City and Mogollon), in 2A (Miami, Morenci, Pima, Saint Johns, Thatcher, Willcox); and 3A (Safford). The first four seasons of the division format had Joseph City, Miami, Mogollon, Pima, and Saint Johns in Division IV with Morenci, Safford, Thatcher, and Willcox in Division III. This season, the nine teams returned to pre-2012 classifications.

The participating student-athletes will not be clicking their heels three times in order to go home. However, similar to the movie, their success or failure lies within; they can achieve whatever they set their minds on. The sky is the limit and anything is possible. 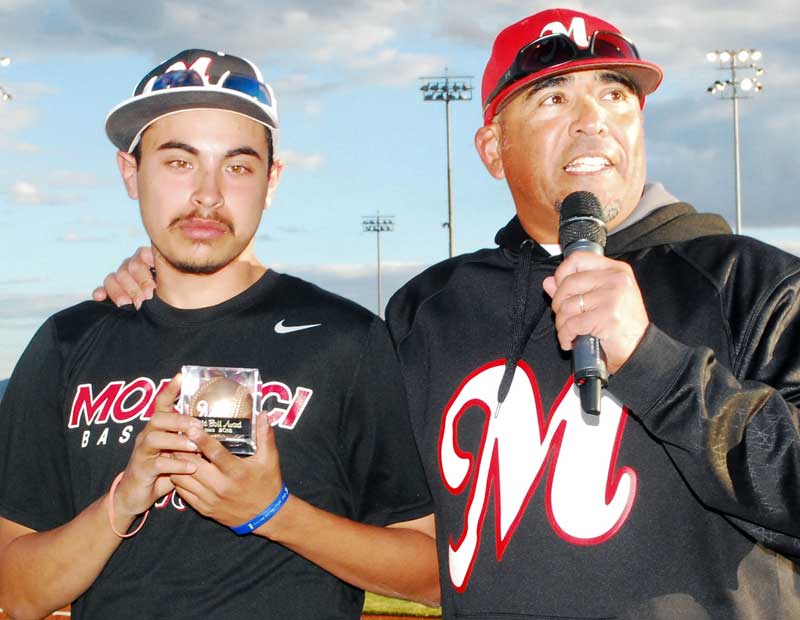 Over the past 14 seasons (2003-16), the nine Morenci Lions Tourney participants have gone a combined 68-79 at Arizona state championship tourneys.

The largest field in 2002 had 15 teams ranging in enrollment size from 1A schools Clifton, Pima and Elfrida Valley Union to 5A Laveen Cesar Chavez.

There have been 17th meets with an out-of-state entrant. The Golden State, the Land of Enchantment, and the Sooner State have been represented.

Twice, the championship game has gone 12 innings before being decided. Morenci slipped past Hayden 6-5 in 1985 and Willcox edged Morenci 13-12 in 2010. Willcox is 3-0 in extra-inning finals.

Four 5-inning title games have been recorded, with both Morenci and Willcox ending with the championship trophy. Morenci was victorious 3-0 over Willcox in 2014 and 12-2 over Miami in 2016 while Willcox prevailed 12-2 over Valley Union in 2005, with the contest abbreviated because of an impending lightning storm, and 4-2 over Thatcher in 2015. The 19-8 Willcox 6-inning 2001 win over Mogollon had been the shortest title game.

Morenci’s baseball facility was dedicated in 2005, honoring 1962 Wildcat grad, area businessman and retiree Francis Waldorf, prior to the seventh place game of the 27th tourney.

A year later, before the start of the 2006 season, the state-of-the-art lighting system was installed.

The school has retired one former player’s jersey, of the late 1986 graduate Daniel B. Lopez who set 10 team records by the time he donned cap and gown. It hangs on the left field fence and a framed replica jersey sits in a Wildcat Memorial Gymnasium trophy case.

Two Morenci Lions Club tourney awards are named for deceased participants, the sportsmanship award and the most valuable player award, in memory of the late official Jose Roberto Sotelo and Lopez, respectively.

The 2016 championship game had Morenci (4-0) pulling away early from Miami. Morenci scored five runs in the bottom of the first inning as the entire line-up stepped to the plate. The host Wildcats added four runs in the second with 10 batters, two in the third with seven batters, and one in the fourth with six batters.

Senior pitcher Ty Miami limited Miami to 15 batters through the first four innings, with only three getting to second base. The Vandals erased the zero on their side of the scoreboard by scoring two runs in the fifth with seven batters.

Meanwhile, Miami  (4-2) journeyed through the losers bracket after succumbing 3-2 to Konawa on opening day, downing Willcox 14-8 during the second day, plus Thatcher 8-3, Saint Johns 15-0 in four innings, and Konawa 8-6 on the third day.