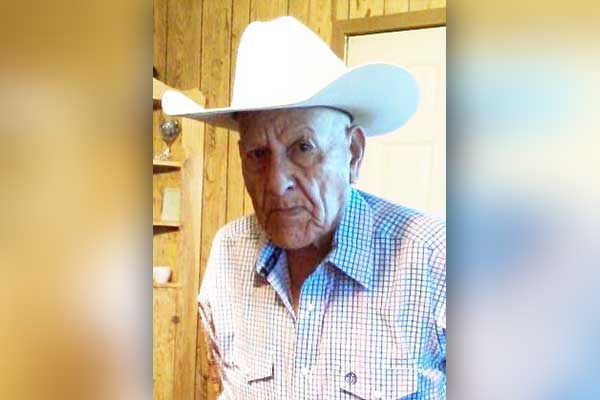 Mike was employed by Big Ranch, the Morris Brothers, Michelena’s Store and owned the Hideaway Store. He then went to work for Gila Valley Irrigation in 1968 and retired in 2000. Mike was a ‘Paid -for-life” member of the American Legion Post 32 in Safford.

Mike rode horses for most of his life. He broke horses at a younger age, became a team roper and enjoyed attending rodeos and horse races. In his earlier years, Mike would have breakfast with his parents, except when he was gone for WWII. He could often be found playing pool and darts with family and friends. When the music began to play, Mike would begin two-stepping to his favorite country music.

In 1943, Mr. Claridge helped keep Mike at home, being the only son, when the military tried to draft him into the Army. When the military sent Mike his draft notice the next year, Mr. Claridge again tried to intervene, but Mike told him “No, I have to serve my country.” In May of 1944, Mike went to Fort MacArthur to begin his duty as an Infantryman in the U.S. Army. While serving in Germany under General Patton, he earned a Combat Infantry Badge, European African Middle Eastern Campaign Medal, Good Conduct Medal and Victory Medal. Mike also earned two battle stars while serving in WWII. Mike often talked about how General Patton was known as “blood and guts.” While serving in Germany, Mike was captured and held as a Prisoner of War for two days until him and a fellow soldier managed to escape. Mike was able to kill a German Sniper, who had killed his fellow soldier. By fellow soldiers and friends, Mike somehow earned the nickname “Sleepy.” After a fellow soldier was killed in combat, Mike brought his personal property back to the waiting Escalante family. The Escalante family had lost all three sons in WWII but gained a friend with getting to know Mike.

Mike was preceded in death by his parents, Miguel and Francisca Guttierez, and grandson Landis Frederick.

The Gila Valley should establish a hall of fame and forever etch the names of all veterans who have marched, sailed, parachuted or otherwise arrived, as ordered, “over there,” ready to live or die on the field of battle. I have the distinct privilege to have a father-in-law who was one of these men. This is his story.

Miguel H. (Mike) Guttierez was the only son of Grandfather/Grand-mother Guttierez and therefore was in a position to get a deferment, but he chose not to. Mr. Guttierez had probably never traveled outside the Valley, and in service to our country, he traveled the United States and was even given a ticket to Europe. He was just about 18 years old when he left the States. He was frightened, alarmed and bewildered at the time.

Private Guttierez had received a very short basic training and was sent to fight the war as part of the 65th Infantry Division and attached to the 1290th Engr. Battalion; these units were in the European Theater of Operations. He was a model soldier and readily obeyed all of his orders. He will discuss the war with me, but in a very quiet voice and not in great detail.

During the last 40-plus years of my marriage to his daughter, he has told me of two significant events he experienced. The events are directly related to each other. As I understand, his unit had crossed the Rhine River and was advancing deep into Germany in pursuit of fleeing enemy units that were in retreat. In one town, the unit’s advance was halted by a very gifted German sniper. One soldier had stopped the attack by his skill with his rifle; he held the high ground (bell tower), and the U.S. troops could not bypass his position. My father-in-law spotted the sniper’s nest and moved to a better vantage point. The soldier immediately behind him was shot and killed by the sniper, and as the sniper scanned for another target, Mike got in one shot with his M-1 Garand. Down the sniper tumbled, and the unit advanced on. Mike Guttierez had never fired a big caliber rifle until basic training, but the family at home had a .22 single shot rifle, which he used only for hunting.

Private Guttierez’s unit proceeded through the city, and upon advancing a few more miles, it encountered a concentration camp, with survivors and slave laborers captured by the Nazi machine. The memories of what they found have faded over time, and he has forgotten many of the details. Mike still despairs of the physical condition of the camp survivors and the manner in which the Nazis handled people as if they were of no more value than animals. The experience and appearance of the victims prompted Mike and his unit to treat these folks to the best of their abilities.

Mike and his fellow soldiers then became medics and caregivers for all those people who had been rescued. They attended their duty faced with an enormous language barrier as these folks were from across the spectrum from virtually every European country crushed by the German war machine. The unit did not have the means of communicating with them, but our soldiers cared for and performed coordinated movements of people to various countries via the war-ravaged transportation system that was available.

At this time, the shooting war was over for the entire unit. Later, the war in Europe ended. Private Guttierez and many others were rotated back to the continental United States for additional training for the Pacific Theater of Operations. It was early into the jungle warfare training that the Japanese government agreed to unconditional surrender.

The U.S. military (leaders) found that they no longer needed a large standing army and proceeded to discharge and transport our soldiers to their homes of record. The U.S. Army never thanked these brave soldiers, and it is my belief that my father-in-law deserved at least a Bronze Star for valor. He earned his Good Conduct Medal, service ribbons for Euro-African and Italian campaigns, but more than that, he earned the coveted Combat Infantry Badge, which depicts an infantry musket from the Continental Army of the American Revolution on a blue background. This is awarded only to soldiers who were under direct enemy gunfire for a period of continuous combat. I am convinced that he and many other minority soldiers were overlooked when valor awards were passed out.

Mr. Guttierez continues to live in Solomon. He and his first wife, Flora Sanchez, had three beautiful daughters and, later in life with his third wife, Ruth Blount, two strapping sons. Mike is and has always been a true cowboy. In his younger days, he broke and trained his own ponies. He was/is a member of the Gila Valley PRCA. He usually competed in calf roping and team roping. He was very active in the association until he began to experience cardiac problems. When he recovered, one of his first actions was to saddle his horse and take her for a spin. He is currently a young 87 years of age, and instead of riding a rocking chair, he chooses to ride his horse.

In closing, I want to publicly thank “Dad” for his war service and sacrifice, and I marvel at his constitution, his honor and valor. We all love the “old cowboy.” He is truly my hero. I also give my thanks to all of the other veterans who have answered the call to duty for any war, especially those who did not return.