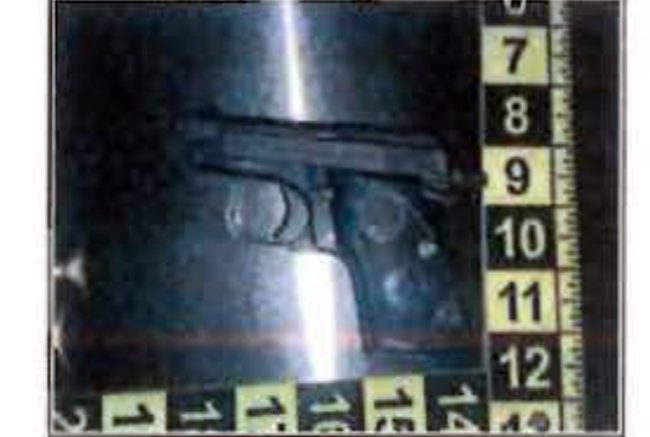 Contributed Photo/Courtesy Greenlee County Attorney's Office: This loaded .25 handgun was seized from a student at Morenci High School after another student allegedly waived it around during an altercation.

Three Morenci High School students gave authorities conflicting accounts involving a pistol being brought on to school grounds on Jan. 27. In fact, the student who brought the .25-caliber automatic pistol to school initially denied having brought the weapon to school. The gun was loaded with nine rounds.

Equally or more important was that one of the three waved the gun in a threatening or intimidating manner at another person in an incident by the “M” near the school campus. 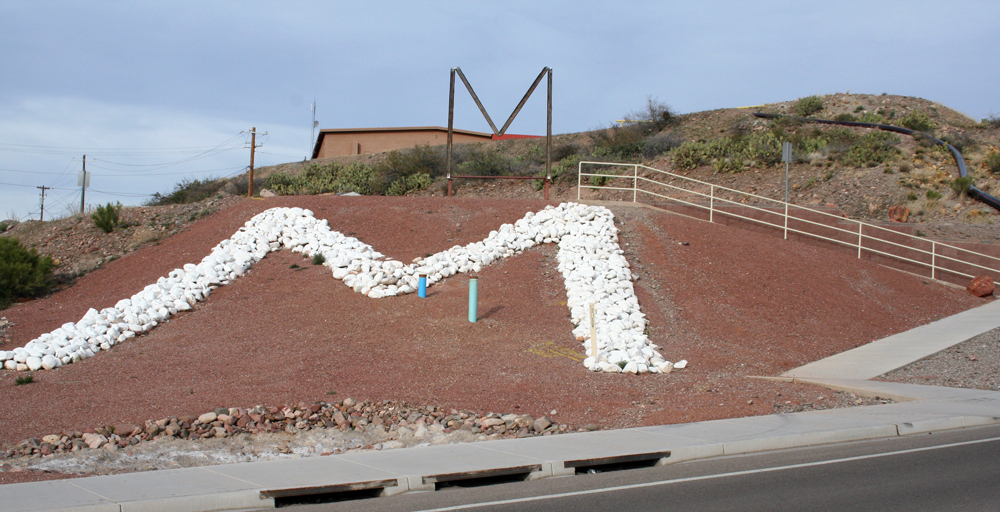 Photo By Walt Mares: The altercation allegedly took place near this “M” by Morenci High School.

Four ended up being taken into custody by police, although the fourth student was not present during the gun-waving incident.  As of Sunday, Feb. 5, all four students remain in the custody of the Eastern Arizona Regional Juvenile Detention Facility in Safford. 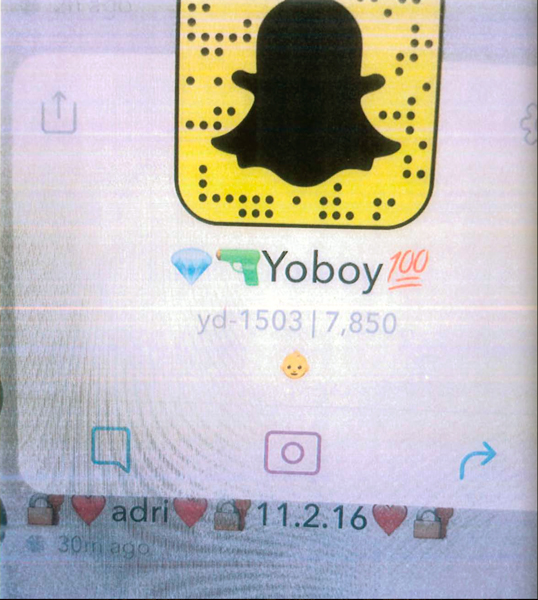 Contributed Photo/Courtesy Greenlee County Attorney’s Office: A parent is being investigated for her messages warning her son of police involvement.

As for the incident directly involving the three students, two of them pointed the finger at each other during separate interviews with school officials and law enforcement officers. The third student initially said he did not see anything but later recanted and told officials he did see one of his partners pull “something out of a backpack.”

After the interviews and despite the conflicting accounts, all three were detained and taken to the juvenile correctional facility in Safford. Two of the students are 15 years old, the other is a 14 and is the one who has been identified as waving the weapon. All three defendants are freshman at the school. A fourth student was also arrested. All of the students are reportedly members of a gang called the “Golden Ghetto Kids, or GGK”, according to a witness.

According to Clifton police Sgt. Jason Mingura, the fourth student was arrested later after being seen by a school videotape security camera near the “M” with the other three. However, he was apparently not  present when the gun-waving incident occurred. He is also being held in the Safford detention center.

Of the three first taken into custody, each was initially charged with two counts of misconduct involving a weapon. The 14-year-old student was additionally charged with threatening and intimidating and disorderly conduct, while one of the 15-year-old defendants was given an additional charge of facilitation and the other was also charged with possession of drug paraphernalia.

The heart of the matter lay in the youngest of the three either waving the pistol at a pickup truck that had stopped where the three were. One of the male subjects in the truck reportedly had an ongoing conflict with the 14-year-old.

The incident, which occurred at a crosswalk near the “M” during the lunch hour, was witnessed by other students who reported it to school officials. They immediately contacted law enforcement. Clifton police and Greenlee County Sheriff’s deputies were quick in their response, a school official noted.

The three students were found in different locations in the school. When found, each was handcuffed. They were taken individually to the high school principal’s office, where they were interviewed by police. Prior to the interviews, school officials contacted the students’ parents to advise them of the situation. The interviews were conducted with parents present. Each student was also advised of his juvenile Miranda Rights. All said they understood their rights, according to police reports.

Prior to being interviewed, one of the subjects was located in the high school gym by law enforcement,  Sgt. Mingura, Greenlee County Sheriff Tim Sumner and a school official.

The student was handcuffed and patted down by Mingura to determine if the he possessed any weapons. He did not and was escorted to the gymnasium locker rooms where he identified bags belonging to him.

One of the three youths said one of his companions had shown him a pistol he had in his possession that morning. It was initially in the companion’s jacket, that had a hole in the lining in which the pistol was being carried. 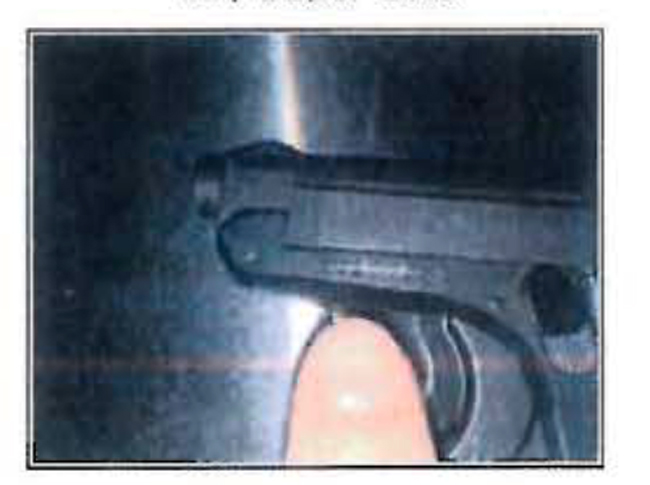 Contributed Photo/Courtesy Greenlee County Attorney’s Office: This gun, along with drug paraphernalia, was found in one of the students’ bag inside a gym locker.”

A witness to the incident said he saw a pistol being retrieved from a black backpack that was lying on the ground when the trio was at the “M.” The witness said he saw a pickup truck stop in front of the trio and someone in the truck rolled down a window. The 14-year-old began “throwing up his arms” and reached into the backpack from which he produced the pistol and reportedly began waving it around, but did not aim it at the truck.

As the truck took off, one of the persons in the vehicle reportedly shouted to the pistol-bearing youth, “I’ll get you next time.” The confrontation apparently occurred because of a personal conflict between one of the people in the truck and the youth with the gun.

One of the three who were taken into custody and had previously said he did not see anything, changed his story. He said that the individual who ended up waving the gun told the companion who had the gun in his backpack to “give me the gun, give me the gun.” It was then that he approached the truck, gun in hand.

Later, when officials searched the backpack belonging to the student who initially said he did not see anything, they found the gun and evidence of drug use. According to a report by Sgt. Mingura, drug paraphernalia was found in the backpack. That included a two-inch blue smoking pipe with residue in its bowl, a round, gold marijuana grinder with green residue, a small, clear baggie with green residue, a small plastic cigarette with residue, a clear foil baggie with a marijuana stem and zigzag rolling papers. All of those items were found in an orange pill bottle.

During inspection of the weapon, police found that it had been scratched in an apparent attempt to conceal the weapon’s serial number. They also learned that the gun had been obtained by one of the three from a parent’s bedroom. It had been located under a mattress. 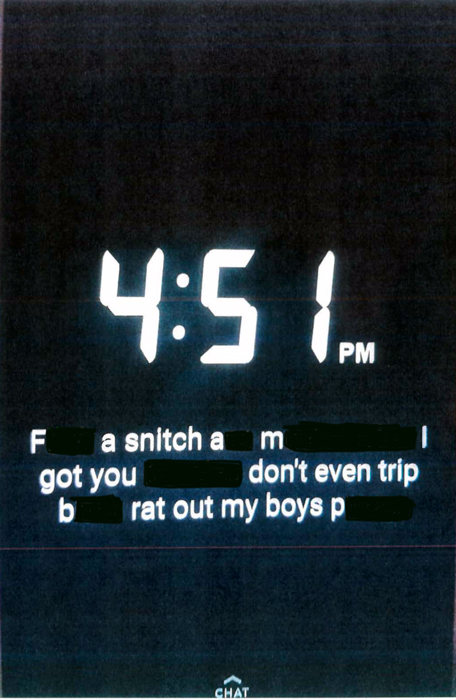 The story does not end there. A Greenlee County Probation officer found a cell phone belonging to yet another student. It had “Snapchat” messages containing threats that apparently involved the gun incident. The messages involved two other youths who are students at MHS, both of whom are on probation but neither of whom were observed at the incident. Discovery of the cell phone and its messages, along with the fact both of the students are on probation, gave authorities cause to search their homes and they did so. One of the two youths was the fourth student at the “M” who was eventually arrested as well. Both students face possible harassment charges.

Additionally, a message on one of the youth’s phones was from his mother warning him to “tell the cops u were hurt about ur friends going to jail. (sic)” The mom’s message also read “make sure u clean up ur shit they (authorities) might go there next (sic).”

Prior to the cell phone messages being discovered, police spoke with the youth’s mother and gained her permission to search the home.  They found “Vapes” used to ingest nicotine, a detox drink and a small, clear baggie with brown residue and no odor to it. The mother told officers she found the baggie outside the home and the bag had seeds in it when she brought it into the house. She said she had no recollection of how the baggie got into her son’s room.

Her comments to police appeared to sharply conflict with the cell phone message she had sent to her son.

Police are also reviewing charges against the mother. Information regarding her was forwarded to the Greenlee County Attorney’s Office.