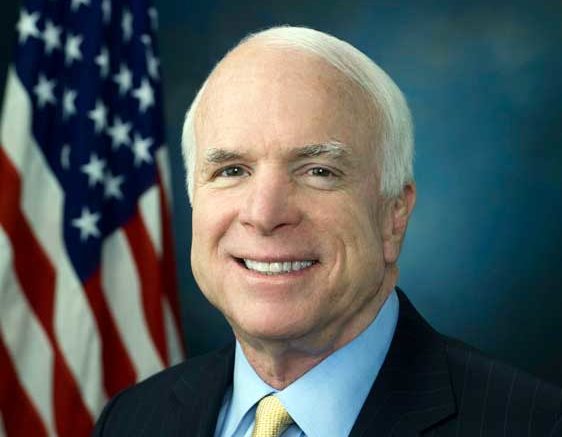 Arizona Senator John McCain has vowed to return to work quickly after being diagnosed with a cancerous brain tumor.

PHOENIX – McCain’s track record is clear, but now the 80-year-old senator may just be in for the fight of his life.

Despite being diagnosed with a cancerous brain tumor, Arizona Sen. John McCain (R-Ariz.) took to Twitter Thursday morning to report he would be back to his maverick ways in Congress soon.

I greatly appreciate the outpouring of support – unfortunately for my sparring partners in Congress, I’ll be back soon, so stand-by!

On Friday, July 14, McCain underwent a procedure at the Mayo Clinic in Phoenix to remove a blood clot above his left eye. McCain had reported to the hospital for a checkup and had complained about bouts with double vision and fatigue. Scans revealed the clot and immediate surgery was recommended.

Tissue samples taken during the procedure revealed a primary brain tumor known as glioblastoma was a reason for the clot.

According to McCain’s office, additional scanning showed the “tissue of concern was completely resected by imaging criteria” and that further treatment options, including chemotherapy and radiation, are being reviewed.

Glioblastoma is an aggressive type of cancer that is difficult to treat. According to medical experts, people diagnosed with glioblastoma survive on average from 14 to 18 months.

According to the American Brain Tumor Association, however, the median survival rate for the most common type of glioblastoma is 14.6 months, with about 30 percent of patients living two years.

“It won’t surprise you to learn that in all this the one of us who is most confident and calm is my father,” Megan McCain wrote. “He is the toughest person I know. The cruelest enemy could not break him. The aggressions of political life could not bend him. So he is meeting this challenge as he has every other. Cancer may afflict him in many ways but it will not make him surrender. Nothing ever has.”

McCain, who has been an outspoken critic of President Donald Trump, also Tweeted about Trump’s decision to end assistance to moderate Syrian rebels fighting Bashar al-Assad.

McCain, a former Navy pilot, was famously was taken prisoner during the Vietnam War when his A-4E Skyhawk was shot down by a missile over Hanoi.

McCain fractured both his arms and a leg in the incident and nearly drowned. When pulled from Trú Bach Lake, North Vietnamese soldiers crushed his shoulder with a rifle butt and bayoneted. him. He was then taken to Hoa Lo Prison, also known as the Hanoi Hilton. Two years into his confinement, he was offered early release after his father, John S. McCain Jr., was named commander of all U.S. Forces in the Vietnam theater, however, despite being tortured on a frequent basis, he refused unless every other man taken in before him was released as well. McCain ended up spending 5.5 years as a prisoner of war and his injuries left him unable to raise his arms above his head.

Eight years ago, McCain was present at the funeral of Sen. Edward Kennedy (D-Mass.), who died less than 15 months after receiving the same prognosis from the disease McCain now fights.