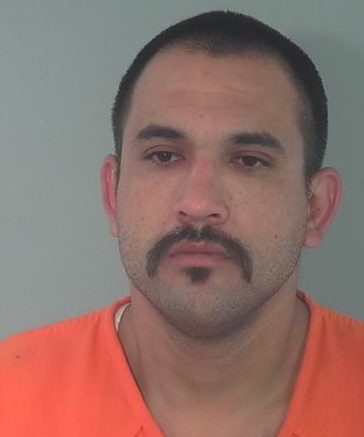 SAFFORD – On Sunday, a Safford police officer patrolling the area of 7th Street and Valley Avenue, observed a vehicle parked outside a residence, occupied by a man and a woman. The officer ran the license plate and found that the vehicle belonged to Daniel Dominguez. The record check showed that Dominguez had an active warrant for his arrest. The officer made contact with the man and woman in the vehicle, and recognized the male as Dominguez. When dispatch confirmed the warrant, the officer asked Dominguez to exit the vehicle to which he complied. Dominguez was placed into handcuffs and secured in the back of the patrol vehicle.

The officer spoke with the woman whom he recognized from prior police contact. The investigator asked her if she was in possession of anything illegal and she answered that she was not. She allowed the officer to search her, and also her purse. No illegal items were recovered and she left the scene on foot.

Dominguez agreed to allow the officer to search his vehicle. In the back seat, the officer recovered a large black and grey back pack. The contents were emptied and a Co2 charged BB gun was found, loaded with BB’s. According to the police report, the BB gun looked like a real firearm, but on further inspection, the officer realized it was a BB gun. The officer also found a large knife with a 15 inch blade in a sheath. A small black canvass zippered bag was found inside the back pack, containing a glass smoking device with a white residue inside of the bowl consistent with methamphetamine. Other contents of the bag included approximately eight cellular telephones, a blonde haired wig, cell phone chargers, small pocket knives and multi tools. As the officer continued the search, a small weighing scale was found underneath the passenger seat.

After Dominguez was read his rights, he was advised of the officer’s findings in the vehicle. Dominguez denied ownership of the meth pipe and the scale. Dominguez was asked if the scale belonged to the woman that was with him, and he stated that it must be, because it was not his. He was also asked if there would be methamphetamine in his system and he said there would be, because the last time he used meth was “about three days ago.” Dominguez told the officer that he used the large bladed knife and BB gun when he goes camping.

Dominguez was transported and booked into the Graham County Jail.