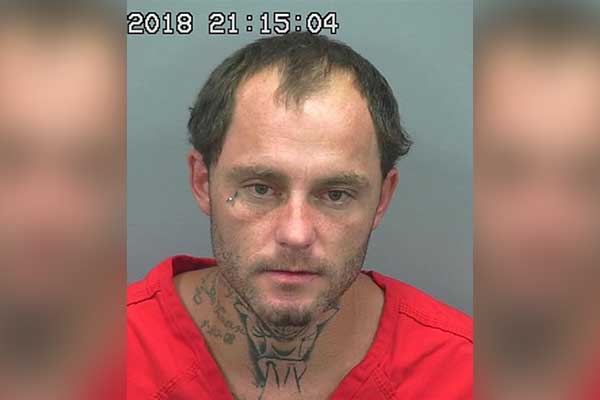 SAFFORD – Last Tuesday, an officer in his marked patrol vehicle pulled into the convenience store on 1st Avenue when he saw a man standing by a white van, that he recognized as Vincent Andrew Congdon, who he knew had two felony warrants for his arrest. The officer also recognized the woman pumping the gas through prior contacts as well as the identity of a second male standing outside the van. The officer approached the rear of the van in his patrol vehicle and told Congdon to come to their position. The officer noticed he was not wearing a shirt, but was wearing two pair of shorts. When Congdon complied to the officers orders, and after the warrants were confirmed, he was placed under arrest. When Congdon asked if he could give the female his property, he was informed that he was going to be searched before giving his property to the woman. Congdon then quickly took off the outer pair of shorts and attempted to throw them to her position but the officer intercepted the shorts and placed them on the hood of the patrol car. Congdon was then placed in handcuffs.

The officer searched the pair of shorts that had been removed, and found seven, 12 gauge, live shotgun rounds. Congdon stated to police that he collects shotgun shells, some live ammunition and some spent shell casings. When asked if there was a shotgun in the vehicle, Congdon replied there was not. He was then placed in the back of the patrol vehicle.

As the officer approached the van, he noticed the woman was now seated in the passenger seat. It seemed suspicious, due to her being on the drivers side pumping gas while the other two men were on the passenger side and a third male was discovered in the backseat. The female reported to authorities that she was the driver of the van, and been given permission from the owner to borrow the vehicle to give one of the men a ride. When the officer asked if he could search the van, she stated that she did not know what was in the vehicle and did not want to be responsible for anything located inside. She was asked several times if there was a gun in the van but she seemed  to have delayed responses and then stated that she would need to speak with the owner. For the officer’s safety, the occupants of the van were removed. The owner of the van was contacted and arrived on the scene, and gave permission for authorities to search the vehicle.

Located beneath the passenger seat was a small compartment, and located inside, the officer recovered an altered shotgun that appeared to be a 12 gauge, but the barrel was cut down to the body of the under side of the wooden grip also referred to as a “sawed off shotgun”. The woman denied knowledge of the shotgun and stated that she knows that Congdon is a convicted felon and that his gun rights are revoked and that he cannot possess ammunition. She reported that she did not know who the gun belonged to, but when asked where Congdon was sitting in the vehicle, she reported he was sitting in the front passenger seat, where the gun was located.

After the gun was secured, Congdon at first denied knowledge of the shotgun, but then recanted his statement, and stated that he did know about the shotgun located in the vehicle. He reported the shotgun belonged to another male who brought it by Congdon’s residence a few days prior in the early morning and stated that his fingerprints would be on it because he handled it. When asked, Congdon at first reported that he was seated in the backseat, but then stated he arrived at the store riding in the passenger seat, but was there for only a short time. Congdon reported to authorities that he was released from prison in 2012 and has not had his gun rights restored. Congdon was transported and booked in the Graham Jail for his two active warrants.

The officer further inspected the shotgun at the police station. The gun had several layers of synthetic texture of the barrel, grip, and handle. The legal length of a shotgun barrel cannot be shorter than eighteen inches in length, and the shotgun measured twelve inches in length. The officer was unable to obtain a serial number of the shotgun and may need to be further inspected by the Bureau of Alcohol, Tobacco and Firearms (ATF).