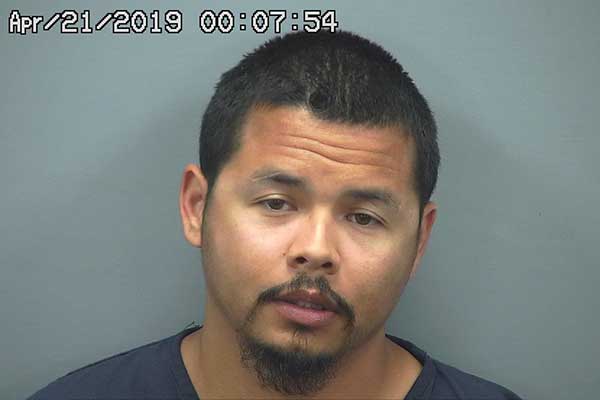 SAFFORD – Just before 9:00 pm last Saturday, a Safford police officer responded to a call to assist a DPS trooper in the area of 8th Avenue and Highway 70 with a traffic stop involving a man with multiple warrants.

When the officer arrived on scene, the suspect appeared to the officer to be tense as he looked around. The trooper moved towards the man, identified as Timothy Paul Benavidez, and informed him that he had a warrant and to place his hands behind his back. Benavidez, however, turned and ran South on 8th Avenue. As the officer radioed in the foot pursuit, the trooper yelled for Benavidez to stop running and that he was under arrest. Benavidez then crossed 8th Avenue as he headed towards Main Street.

The trooper gave multiple warnings that he was going to be tased. The trooper attempted to deploy his taser but no probes deployed and it was ineffective. As Benavidez continued to run, the officer then attempted to tackle him, resulting with them both falling to the ground. During a scuffle that ensued, the officer’s pants were ripped near the knee area which included an abrasion to his leg that was bleeding.

The officer got up, drew his taser, and told Benavidez to stop or he would be be tased. Benavidez continued to back up and then attempted to run again, at which point the officer deployed his taser successfully, causing Benavidez to fall to the ground. Benavidez resisted and continued to put up a struggle and the trooper and officer took him into custody. The officer’s leg injury was documented as well as the pants that had gotten ripped in the struggle, which were valued at approximately  $75.

When the officer asked Benavidez if he was injured, he stated “no” he was not, although an ambulance had been called to evaluate him nonetheless. Benavidez was transported and booked in the the Graham County Jail.