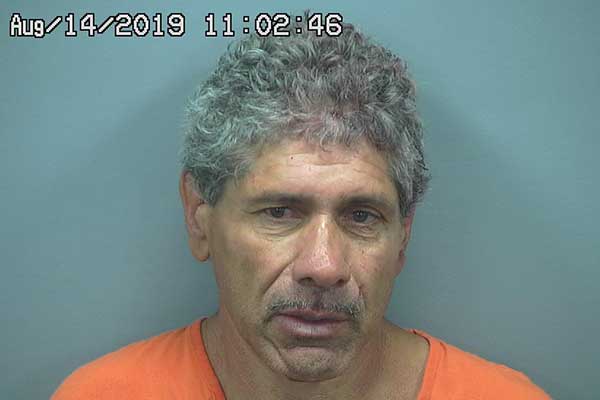 Safford police officers were dispatched to Safford City Hall just before 8:00 a.m. last Wednesday to deal with a man who was reportedly causing a disturbance. The man, identified as Sylvester Sanchez, was being very demanding and disrespectful to City Hall officer personnel.

Apparently, Sanchez had come in asking for legal papers and was referred to the Clerk of the Superior Court. Sanchez said that they don’t like him over there and asked to talk to the chief of police. The police chief was not available so an officer was sent to talk to the man

An officer arrived at City Hall and found Sanchez sitting behind a desk near the building’s entrance. The officer asked Sanchez to go outside and talk with him.  The officer noted that he has had numerous casual conversations with Sanchez and nothing seemed abnormal about this particular contact.

However, once outside, Sanchez told the officer that that he was trying to get some documents related to the San Jose bar. The officer pointed out that the documents Sanchez was looking for would actually be at the county and not the city offices.

The officer then spoke to Sanchez about his demeanor while talking to the staff at City Hall. He told Sanchez that some of the people he was talking to at City Hall were concerned about his behavior toward them. While the officer was talking, Sanchez abruptly turned and started walking back toward the building. The officer told him not to go back in. Sanchez continued on his course so the officer put his hand on Sanchez’s shoulder and told him again not to go in.

Sanchez apparently turned on the officer and threw his coffee mug at him, hitting the officer in the chest, drenching him and his patrol car with coffee. Sanchez made a run at the officer, trying to hit him and grab his duty belt. The officer quickly backed up and drew his taser. He pushed Sanchez back enough to deploy his taser but it misfired.

Sanchez ran at the officer again, trying to hit him. The officer didn’t have time to holster his taser and in an effort to defend himself, hit Sanchez in the head with the handle of the taser. Sanchez backed off and started to go back toward the building.

The officer told him not go in. A city employee tried locking the door to prevent Sanchez from entering but didn’t get it closed in time.  The officer deployed pepper spray in Sanchez’s face as he was opening the door, but it didn’t deter Sanchez from forcing his way into the building. Once inside, he turned again on the officer as though he was going to attack him. The officer drew his baton and struck Sanchez twice in the thigh area. The officer was finally able to tackle him to the floor.

The struggle continued on the floor as Sanchez tried to grab the officer’s duty belt. The officer could feel Sanchez pulling on his gun holster. Another officer arrived and helped subdue Sanchez and handcuff him.

Sanchez was escorted out of the building and an ambulance was called to the scene. Sanchez was transported to the emergency room, accompanied by another officer.

A deputy helped the first officer wash blood and coffee off of himself. The deputy pointed out blood on the officer’s holster where Sanchez was trying to get his gun.

Sanchez received 7 staples for the laceration to his head, presumably caused by the blow he received from the officer’s taser. Once cleared from the hospital, he was booked into the Graham County Jail for aggravated assault on a police officer and disorderly conduct.