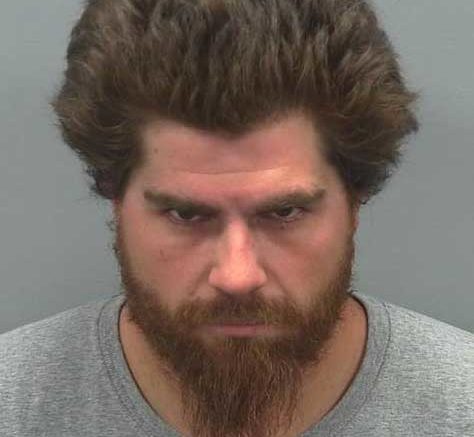 SAFFORD – On Sunday, authorities responded to a request for a welfare check at a residence. Upon arrival police found a man, later identified as Edson Robbins, hunched over in the driver seat of a vehicle that had shirts covering the driver’s window. The officer knocked on the window, and Robbins slowly came to and opened the car door. After showing the police his drivers license, he explained that he had a late night and fell asleep in his car. He said he was wondering where his ex-wife went.

A records check of Robbins revealed a Graham County Sheriff’s Office Felony Warrant for possession of narcotics and possession of drug paraphernalia. Authorities informed Robbins of the warrant. Robbins reported his prior drug use was heroin and he had a prescription for Suboxone but he told the officer there was nothing illegal on him or in the car. He gave consent for police to search the vehicle and asked to make contact with his ex-wife at a residence near by. An assisting officer helped to make contact with her.

When authorities searched the car, they found a small ziploc baggie on the passenger seat which appeared to have methamphetamine residue inside it and a cut straw with a burnt end between the center console and the passenger seat. When the ex-wife came out and asked if she could retrieve the Suboxone out of the trunk for Robbins, an officer asked her about her past drug use and she admitted she used meth and used approximately two days prior at a friend’s house which she ingests by inhaling it. The officer showed her what he had found in the car and she denied ownership. She reported that Robbins was out late the night before with his friends and it could possibly be one of theirs. She told authorities she was sitting inside the car with Robbins and he passed out. She tried to wake him but was unable to, so she went inside and about 10-15 minutes later the officer knocked on the door. She again denied ownership of the paraphernalia.

The officer spoke with Robbins about the paraphernalia and Robbins immediately reported it to be his ex-wife’s. Robbins was booked in the jail for his warrant.