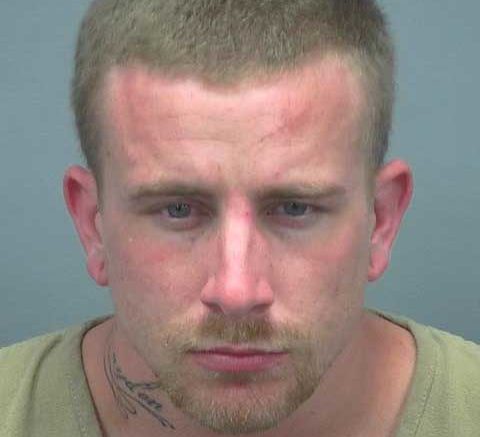 SAFFORD – Authorities were conducting a traffic stop on Sunday of a man and woman that police have had prior contacts with. After the officer informed him of the improper driving, the driver was asked to provide his license, along with his vehicle’s insurance and registration. The driver reported to the officer that he did not have a valid driver’s license, only his I.D. card showing he was Alexander Schade. While Schade tried to look for the documents in the glove box, the officer noticed Schade appeared to be overly nervous, so much so, that he put his unlit cigarette in his mouth backwards, with the filter end to the outside. Other officer’s had been requested to the area as authorities were checking for warrants. The other officers arrived as dispatch confirmed a warrant for arrest. When the officer notified Schade of the warrant and asked him to get out of the vehicle, the officer asked him if he had any needles on him and he said that he did not. When Schade was pat searched, police found a used syringe in his front pocket. The officer could see the syringe had liquid streaks on the inside of the tube from prior use. During this time, one of the other officers had found a loaded syringe on the woman in the car that they saw she was trying to hide. The female reported that Schade had handed her the syringe as they were being pulled over and knew drugs were in it. She also reported to authorities that she had used meth earlier in the day, but that she does not like needles so she snorts meth instead.

During a search of the vehicle, four syringes were located total; three on the floorboard, passenger side seat, and center console which appeared to all have been used. One in the female’s purse appeared new and still in the packaging. A small container was also found in the center console compartment which had a white powdery residue inside. The woman said that none of the items belonged to her. When the officer spoke with Schade regarding the items found, Schade confirmed that all of the items found were his and he had asked the female to hide the syringe.

Schade was transported to the Graham County Jail. The female was advised that she could potentially be charged with possession due to the attempt to hide the loaded syringe, having one in her purse and being within reach of all contraband found.