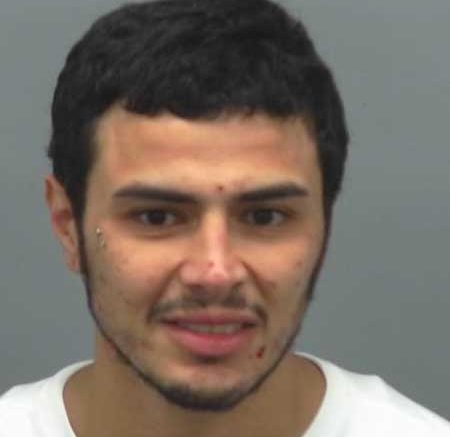 SAFFORD – Authorities were dispatched to a hotel on Highway 70 on Wednesday due to a man that was upset that he had been asked to leave his room without being given a refund. It was reported that the room smelled of strong marijuana and maintenance had found a glass pipe, so the man was asked to leave.

When the officer arrived, he recognized the man through prior contacts as Eduardo Pena. The officer informed Pena of the reason he was asked to leave the hotel but Pena denied having marijuana, however, the officer could see open sores on Pena’s arms, neck and face, as well as track marks on his arms from needle injections.

On the luggage cart next to Pena, authorities saw a torch, a safe, boxes, as well as bags of clothes. Pena reported that he was at the hotel with two girls that are his friends but that he does not have a way to contact them. Pena reported the safe belonged to one of the girls but that there was nothing illegal inside. Pena continued trying to contact someone on his phone to come pick him up while the officer was speaking with him. Authorities informed Pena that he was able to throw away the safe in the event that there was something illegal inside and he didn’t want in his possession. Pena reported there was nothing illegal in the safe, but he has not looked in the safe. Police were told the key to the safe was somewhere within the luggage. Pena began looking for the key and showing police what property was his. As Pena was looking, the officer could see in plain view a digital scale, plastic drug packaging material and a small plastic baggie with meth residue which Pena denied ownership of.  Pena told the officer that he didn’t want the safe and when the officer went to pick it up, he could smell the odor of marijuana coming from it. Even though Pena continued looking for the key to the safe, it was never found.

Police arrested Pena for the drug paraphernalia and after pleading the “fifth” Pena was handcuffed and booked in the Graham County Jail.

After authorities received a signed search warrant the safe was opened. More drug paraphernalia was located inside. The cell phone contained at least one drug related text and numerous photos of drug activity.