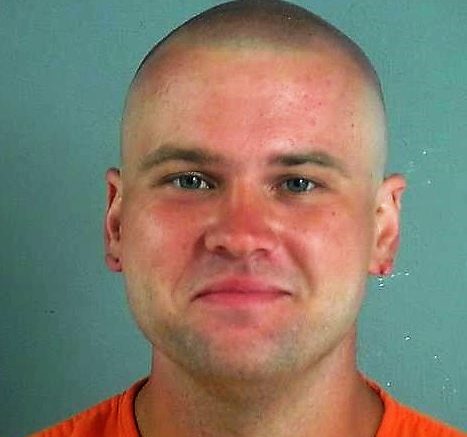 Contributed Photo/Courtesy GCSO: Cecil Reed was booked into the jail after allegedly using his knife to threaten a person.

SAFFORD – A man said his knife was blessed by a “sensei”, but that didn’t stop the police from confiscating it and taking him to jail.

Cecil Reed, 26, was arrested and booked into the Graham County Jail on Thursday after allegedly using his knife to threaten a man in the parking lot of Thriftee Food & Drug.

An officer was dispatched to the store at 755 S. Central Ave. at about 7 p.m. regarding the incident. Graham County Dispatch alerted that the suspect, later identified as Reed, had left the area on a bicycle.

As the officer arrived at Thriftee, he noticed a bicyclist eastbound on 8th Street. The officer caught up with the rider and noticed he fit the physical description of the suspect and was in similar clothing, including a white tank-top style T-shirt.

The officer asked the rider if he had a knife and Reed allegedly pointed to his right hip and said he carries a blade that was blessed by a sensei. A sensei is a Japanese term that literally means “person born before.” It is most commonly used to describe a teacher of martial arts, but can also be used to show respect to someone who has achieved a level of mastery in a variety of art forms or skills.

After securing the curved-style blade in his patrol vehicle for his own safety, the officer asked Reed if he had a confrontation at Thriftee.

Reed allegedly said he was getting a soda from the outside machine when a man in a red truck nearly struck him. That caused Reed to advise the driver to be more careful. Upon doing so, Reed said the driver then got out of the truck and began yelling at him.

Reed said when the driver began to approach him, he reached toward his knife and told the driver to back up or he would “end it.”

Reed said the driver then ran back to his truck, grabbed a chain and chased Reed down the street passed the Coca Cola plant, according to the report.

The victim, however, described a different scenario to another officer. He said when he arrived at the parking lot, Reed was standing in the middle of a parking row. He said Reed then began yelling and pulled out his knife. The victim was able to accurately describe details of the knife, including its color and that there were holes punched through the blade.

Reed was then transported to the jail and booked on charges of aggravated assault with a deadly weapon and disorderly conduct with a weapon.