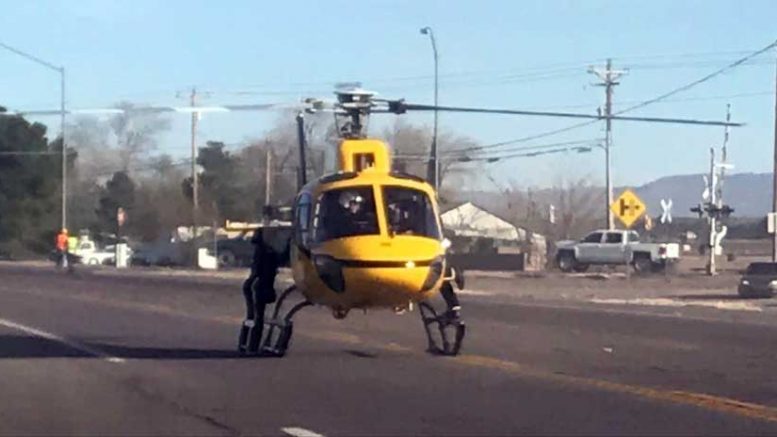 Contributed Photo/Courtesy DPS: A motorcyclist was flown to a Tucson hospital Saturday in an AirEvac-21 helicopter after suffering multiple fractures while riding in the Pinaleño Mountain Range.

PINALENO MOUNTAIN RANGE – A man was flown to Banner-University Medical Center Tucson on Saturday after suffering numerous fractures in a motorcycle crash Friday.

According to a Graham County Sheriff’s Office report, at 1:23 p.m. County Dispatch received an emergency SOS beacon for a KTM motorcycle that was activated by Douglas Phelan at his campsite roughly one mile south of Highway 266 in the Gillespie wash area.

Deputies used the GPS from the beacon to locate the campsite. Upon arrival, Phelan informed deputies that he had gone riding on his Yamaha motorcycle and crashed the previous day. He then rode back to his campsite and went to sleep.

When he woke up, however, he was in too much pain to move and couldn’t even reach for his cell phone. Luckily, his emergency beacon for his KTM motorcycle was within reach, and he activated it.

Phelan was located inside his locked camper, and a deputy climbed through a window to gain access and unlock the camper.

According to a followup call at the hospital, Phelan suffered a broken clavicle, wrist, and leg as well as fractured ribs among other injuries.

His two motorcycles, a truck, and trailer were towed from off the mountain for safekeeping at the Graham County Yard, and other property, including various firearms, were taken by deputies for safekeeping as well. Phelan’s camper was secured and allowed for ventilation.