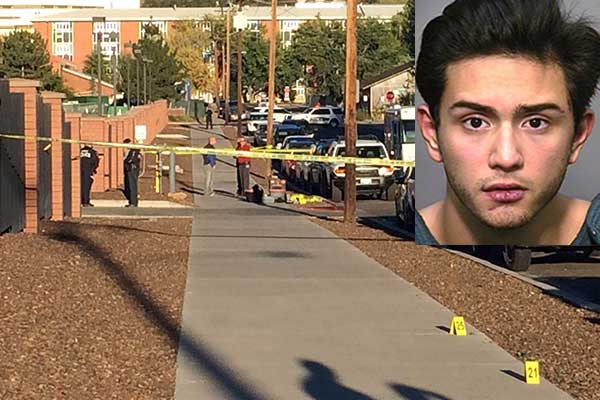 FLAGSTAFF, Ariz. (AP) — The man charged in the fatal shooting of a Northern Arizona University student will be allowed to live with his parents, a decision that means the family that once owned a gun shop will have to remove all weapons from their Arizona home.

Steven Jones will be monitored around-the-clock with a GPS device and must surrender his passport. He won’t be allowed outside his parents’ Glendale home between 6 p.m. and 6 a.m. and cannot come into contact with any of the victims, Coconino County Superior Court Judge Dan Slayton ruled Tuesday.

People on both sides of the courtroom cried as Slayton announced his decision, Jones and his parents in a sign of relief, and representatives of the victims in disappointment.

Prosecutors had argued against Jones’ release, saying he’s a danger to the community and wasn’t justified in using lethal force after a largely verbal fight last fall.

Jones, who kept a gun in the glove box of his car, is charged with first-degree murder in the Oct. 9 death of Colin Brough on the university’s main campus in Flagstaff and six counts of assault for injuring three others students. Jones maintains he acted in self-defense.

His attorneys cited his lack of criminal history in arguing for his release from jail and said he had no desire to flee. Slayton denied the request in February, but he said he’d reconsider once he had more information on how home confinement would be carried out.

Slayton talked with court officials in Maricopa County who said they were willing to supervise Jones, under conditions that include searches of the Glendale home and an affidavit from his parents saying they will not possess any weapons.

Jones’ father, Warren Jones, owned a gun shop in Glendale for about three years until dissolving the company in February, according to state records. Steven Jones’ attorney, Burges McCowan, said the family has packed up any weapons they had in hopes that Jones would be released.

“Obviously Steven and his family are relieved,” McCowan said. “We appreciate the judge keeping in mind he’s an innocent man as he stands today.”

Slayton rejected a plea from prosecutor Ammon Barker to place Jones under house arrest. The judge said Jones would be arrested immediately if he misses a payment for the GPS monitoring, about $4 a day, or if he tampers with the device. He also cannot shoot weapons outside his parents’ home.

Barker declined to comment on the ruling Tuesday, but he wrote in court documents: “There is no amount of supervision that the state feels will adequately safeguard the community.”

Louis Diesel, a Flagstaff attorney who represents Brough’s parents and two of the shooting victims, Nicholas Piring and Nicholas Prato, said they are disappointed in the court’s decision.

But, he said, “we understand the court has discretion to do so and are looking forward to the trial where hopefully the victims can find justice.”

A trial date has been set in April 2017. Jones has been held at the Coconino County jail on a $2 million bond since his arrest shortly after the shooting.