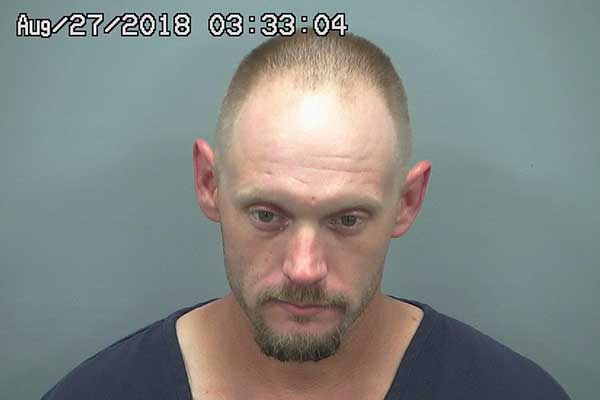 SAFFORD – Last Monday, around 1:20 am, an officer was on patrol in the 200 block of 6th Avenue, and noticed an SUV  sitting outside a residence that is known for criminal activity. The vehicle was parked away from the curb more than what is legal, so the officer pulled in behind and could tell the engine was still running and had a male driver with a female passenger. The officer spoke with the driver, who then reported that he did not have a drivers license and the passenger stated she did not either. When asked, the woman stated they were there to pick up her dog.  The two of them reported to the officer that neither of them had a form of I.D. The officer noticed as they were speaking, the woman seemed to be doing something on her cell phone and the male appeared nervous, fidgety, and was breathing hard.

The man identified himself as Jonathan Ingram and the woman identified herself also. Ingram stated he was taking the woman home and the vehicle belonged to a relative. Both of their residences were reported being south of Safford. The woman then stated they were at the residence to visit with someone, but they had just arrived. When the officer asked Ingram what identification he would have, he began removing items from his pocket. Ingram’s hands appeared to be shaking, and in the meantime, dispatched informed the officer that Ingram’s license had been revoked and the female passenger’s license had been suspended. Ingram also pulled out of his pocket a metal weight scale. When the officer asked what was in the vehicle, Ingram stated he was going to detox the next day. When asked what drugs were in the car, he reported ” a good little bit” of meth, and then later stated ” a lot.” Ingram was cooperative with authorities and informed them of needles in the vehicle and handed over between 17-18 grams of meth.

Ingram said the woman was just a friend and was unaware of the drugs in the vehicle and she was released from the scene. Officers had Ingram contact the family member who was the registered owner of the vehicle to come pick it up. Ingram stated to the officer that he is currently on probation, and that he had lost his job recently due to his drug relapse. He told the officer that he had been clean for two years and he was wanting to go to rehab because this is not who he is. Ingram was transported to the Graham County Jail and booked for possession of a dangerous drug for sale and possession of drug paraphernalia.