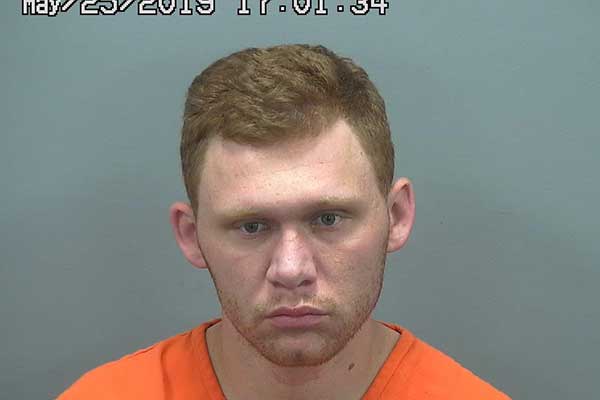 A Safford business owner called the police station on Saturday, May 25 to report that somebody had broken into her business earlier that morning. The woman told authorities that she was out of town when she called at approximately 9:00 AM, and that she had received an alert on her phone from her security system indicating that somebody was inside her business, which was closed.

She explained that she had recently installed security cameras in her office because of a recent break in. The camera system is designed to detect motion. When she got the alert on her phone she checked the security camera and was able to see a male figure in her business. She recognized the intruder as Andrew (Drew) Anderson. She said that she suspects that Anderson was the one who previously broke into her business but was unable to prove it.

The victim emailed a copy of the video to the police officer she reported the crime to so he could review it. When the officer reviewed the video footage, he too recognized the intruder as Drew Anderson from previous police contact. Anderson was wearing a long sleeve gray and red shirt with a black hat. He tried to cover his face with a bandana, but the officer easily recognized him from numerous prior contacts.

The officer recognized Anderson’s profile and the bandana was low enough that he could see the top shape of his nose and eyes. The subject also had red hair, which convinced the officer that it was Anderson. The camera stopped recording shortly after Anderson was seen entering the business, so what he did once he was inside the business was initially unknown.

Authorities went to the business to check the building and found the back door unlocked. Officers cleared the building and nobody was found inside. The point of entry was found to be a window on the northeast side. The window had been slid open and several pieces of furniture on the inside had been knocked over.

Officers located several open desk drawers in an office and a cabinet appeared to have lock missing and had obviously been tampered with. A hammer was found on a table. An officer contacted the business owner by phone to report what they found.

Two officers drove to Anderson’s residence and knocked on the door. They could see children watching television through the window. The children answered the door and the officers asked them if their parents were home. They went to the back of the house and soon Anderson came to the door. Officers asked him to step outside so they could talk to him. The officers explained why they were there and asked Anderson for his side of the story. Anderson told them that he didn’t know what they were talking about and claimed that he had not left the house that morning. The officer who had reviewed the video tried several times to tell Anderson that he had been seen on video, but Anderson continued to deny the accusation.

Anderson was arrested and transported to the Safford Police Station for further questioning. At the station, Anderson was shown the video and asked why he was in the building. He would never give a straight answer and kept asking to review the video again. Anderson kept saying that the person in the video had his face covered. The officer told Anderson that through their many contacts he could recognize him through his disguise.

While speaking with Anderson, officers noticed fresh dark track marks on the inside of both of his arms. Anderson hesitantly told them that he had last used heroin four days prior. Authorities told Anderson that he was being charged with criminal trespass but when the business owner got back into town, he might be charged with burglary if she found anything missing. Anderson was booked into the Graham County Jail on charges of criminal trespass.

Later that afternoon, the officer spoke with the business owner on the phone. She reported that $340.00 was missing from her office. The money had been in a blue bank bag that was in the filing cabinet that had the lock broken off of it.

The clothes that Anderson had been wearing in the video were also found in the dirty laundry at his house. An officer went to the jail and added burglary to Andersons booking sheet.