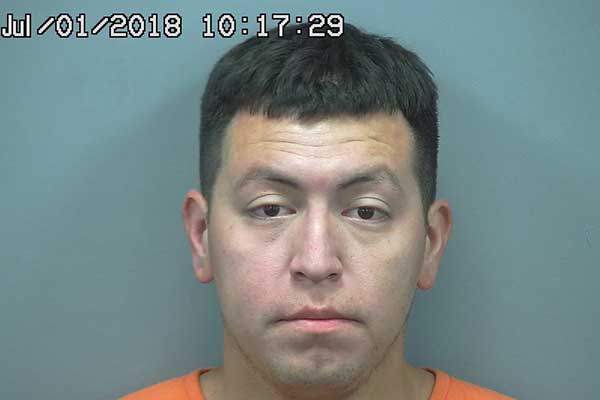 SAFFORD – In the early hours of Sunday morning, an officer on duty in the area of 8th Avenue and 12th Street noticed a truck taking a wide turn around the corner. The vehicle did not have a license plate. The officer recognized the driver as Randy Morales. When the officer pulled out and activated his emergency lights, the truck accelerated and turned down an alley. The officer radioed in that the vehicle was evading authorities. The truck pulled into a residence on 7th Avenue, Morales jumped out and ran. The officer exited his patrol vehicle, yelling “police” and ordered Morales to stop. But Morales continued to run and the officer chased after him but lost sight of him. The officer returned to the truck as he radioed other officers of Morales’ clothing description and where he might possibly be headed. The officer on scene ran a check on the truck and found the insurance cancelled and mandatory insurance suspended registration. The truck was towed due to no insurance and registration.

Another assisting officer saw a car that Morales is known to drive in the area of 12th Street and 7th Avenue. The officer activated his emergency lights behind the car, but the vehicle continued to drive, stopping at stop signs as it continued down other streets. It came to a stop at a residence on 8th Avenue and the officer could see there was a woman in the car with Morales. Morales got out of the car and started to run to the residence as the officer yelled for him to stop but Morales continued to run inside.

Authorities tackled Morales to the ground as he was opening the door. When  officers were attempting to handcuff him, three woman hovered over them screaming and yelling at the police. Authorities continued to tell them to back away multiple times and had to push one of them away when they would not listen. Morales was taken to the patrol car. When they confirmed that the insurance for the vehicle he was driving had been suspended, a towing company was contacted to tow the vehicle. However, one of the women that was yelling at the officers stated that both vehicles belonged to her and told the police that they couldn’t tow them. She was also complaining of her chest hurting from being pushed. When she was asked if she wanted an ambulance, she declined. Despite the woman’s objections, the vehicle was towed, and Morales was placed under arrest and transported to the Police Department for further investigation.

The first officer spoke with Morales when he arrived at the Police Department about the charges he was facing and why he ran. Morales stated that it was just a natural reaction for him to run, that he was headed to the convenience store and he didn’t know why, after running from the officer, he went  and got another vehicle. The officer asked Morales if he was high or coming down off drugs. Morales responded that he was dizzy. The officer noticed his speech was stuttered and slurred at times, his head nodding and he was sniffing his nose while his muscles would tense and then relax at times. Morales apparently reported he had used Heroin and Meth the day before and that he also uses Suboxone. Morales was complaining of dizziness and that his hand that had stitches in it, was hurting but declined to have an ambulance called to check him out.

After having his blood drawn, Morales was transported and booked in the Graham Jail for DUI, two counts of failure to comply with a police officer’s lawful order, and resisting arrest.