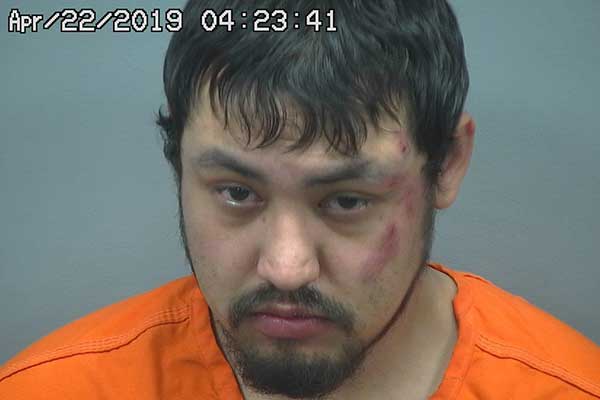 SAFFORD – Last Monday around 1:30 am, authorities received a call from a woman regarding her former boyfriend identified as Mario Ogas. Over the phone, the victim explained she had given Ogas a ride to his work at a fast food restaurant and that he was drunk. The victim stated that a short time later she received a phone call from Ogas accusing her of stealing his cell phone. The victim reported that Ogas had his phone when he got out of her car at his work. Ogas also made threats to the victim that he was going to come to her residence an attack her new boyfriend. The victim told the officer that she had gone to look for Ogas to avoid the potential of a fight between him and her current boyfriend. She found Ogas walking on 1st Avenue and attempted to talk with him. He was reportedly angry and yelling. He knocked over a trash can and punched several telephone poles. Ogas then punched the passenger side door of her car. The victim said that she had gone home to call the police, fearing Ogas would come to her residence. The victim stated she had made it clear she did not want Ogas to come onto her property. She did not want to press charges, she just asked if officers could come by and make sure Ogas was not outside her residence. As the victim was ending her conversation with the officer on the phone, she reported that she could hear footsteps outside her residence and feared Ogas was outside.

Authorities arrived at the residence and found a man and woman yelling at one another between two vehicles in the driveway. The man was identified as Ogas, and the woman was the victim who had called the police. The vehicle’s passenger door was open and authorities could hear Ogas yelling at the woman, asking where his phone was. Police called out to Ogas by name several times and at one point, Ogas looked directly at the officer but he ignored their commands and continued to yell at the victim. An officer grabbed Ogas by his right arm in an effort to take control and end the argument. As the officer grabbed his arm, Ogas attempted to turn back toward him and started to fight the officer. Utilizing an arm bar, the officer forced Ogas into the side of a vehicle. Ogas turned around and attempted to punch the officer but missed. The officer grabbed Ogas by the throat and pressed him back against the vehicle, while another officer grabbed Ogas from behind and forced him to the ground. Ogas landed on the ground with both officers on top of him. Once he was on the ground, Ogas seemed to calm down and was then placed into handcuffs. Ogas received a few scrapes, but stated he was fine and did not require medical treatment.

The victim stated she did not wish to aid in prosecution. The victim was informed that due to it being a domestic violence situation charges would still be pursued. The victim’s current live-in boyfriend then stated he wished to pursued charges for trespassing.

Ogas was transported to the Graham County Jail. While speaking with the officer, Ogas admitted to punching the victim’s car out of anger, and that he had gone to the victim’s residence in order to retrieve his cell phone even though he knew he was not welcomed there. Ogas stated he believed the victim stole his phone while she was giving him a ride to work. Ogas also admitted to to consuming alcohol prior to going to work. During the booking process, Ogas blew a .189 on a portable breath test. Ogas was booked for Criminal Damage/DV, Criminal Trespass 3rd Degree, Disorderly Conduct/DV.