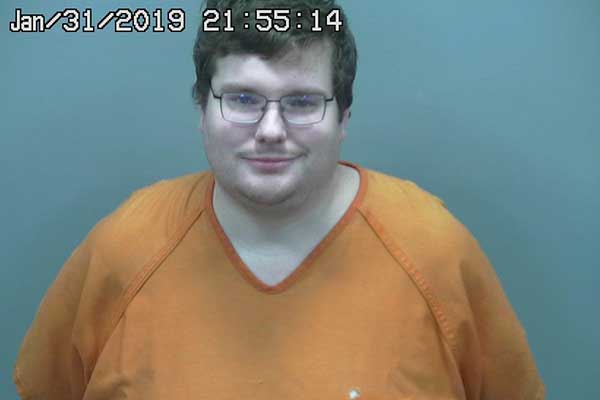 SAFFORD – An officer was dispatched to Walmart last Thursday around 1:45 pm due to the report of shoplifting. It was reported that an ex employee, identified as Brandon Kunz, had entered the store that morning and had stolen Steel Reserve beer, valued at $10.33.  Kunz was known by the associate who checked him for a receipt at the grocery side exit but was allowed to leave after he claimed that he had lost it. Asset Protection viewed surveillance footage and could see Kunz had never paid for the beer. The officer attempted to make contact with Kunz but was only able to leave a message for Kunz to call the officer back.

Later that evening around 7:30 pm, another officer was dispatched to Walmart in reference to a shoplifter who was in custody. Asset Protection stated Brandon Kunz had come back into the store and again went to the beer aisle and picked up a case of Steel Reserve beer. Kunz tried to walk out of the store without paying for it and when he was stopped, kept insisting he had thrown away his receipt. When the officer began reading Kunz his Miranda Rights, he interrupted the officer and asked “I’m being detained?” The officer confirmed that he was. When asked what happened, Kunz stated he was “just being stupid.” When the officer would ask Kunz questions, he repeated that he was being “stupid.” When the officer attempted to handcuff Kunz, he resisted by stiffening his body posture and tried to prevent the officer from turning him around to put him in handcuffs.  Apparently Kunz changed his mind and complied and then pleaded that he wanted to cooperate.

Walmart stated they wanted Kunz trespassed from the store. On the way to the jail Kunz reportedly apologized and told the officer that one of his family members used to be a cop and told him not to trust the police, so he was just doing what he was taught. When the officer asked what happened earlier with the beer, Kunz stated he just forgot to pay for the beer earlier and didn’t notice he didn’t pay until after he left. Kunz then stated he was surprised how easy it was so he decided to try it again.

At the jail, Kunz was booked for Shoplifting and issued two separate citations for the two incidents.