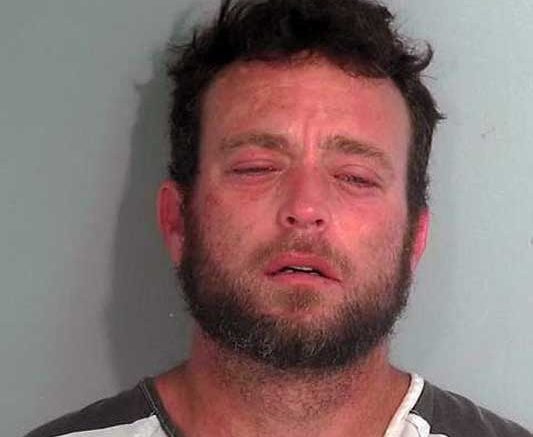 Contributed Photo/Courtesy GCSO: Jason Lawler was booked into jail for aggravated assault after allegedly kicking a Pima officer in his face.

PIMA – The time for questioning an officer’s actions is never when a person is being placed under arrest but afterward in a court of law.

A Pima man learned that lesson the hard way Monday night after tussling with officers ended with him being struck twice by a TASER and levied a felony charge of aggravated assault.

Speaking to the Pima Town Council on Tuesday night, Pima Police Chief Diane Cauthen said attacks on officers have increased, and while unwanted, the result will always be the same.

“You mess with the police, you’re going to jail,” she said.

Officers were initially dispatched to the 900 block of 250 North at about 7:38 p.m. regarding a domestic disturbance. Upon arrival, an officer was informed that Jason Lawler had a verbal confrontation with the resident, who is his mother. Lawler’s mother said Lawler was yelling at her about wanting to stay at her house and she asked his girlfriend to go next door and call the police.

By the time officers arrived, Lawler was no longer at the property, and his mother said she did not wish to pursue trespassing charges. The incident could have ended at that, but unfortunately for Lawler, at that same time another Pima officer – accompanied by an Arizona Department of Public Safety officer – had located him walking down U.S. Highway 70.

According to a Pima Police report, Lawler refused to talk to the officers and continued walking along the highway. The officer noted Lawler appeared intoxicated, and a previous witness had reported he appeared to be under the influence of some type of drug.

The officers attempted to detain Lawler, but he resisted, which resulted in the Pima officer using his TASER on Lawler. The suspect allegedly shouted, “that feels (expletive deleted) good” when hit by the TASER and continued to resist.

The officers continued to struggle with Lawler and eventually gave him another TASER stun, which finally allowed the officer to take control of Lawler and put him in handcuffs.

However, while placing Lawler in a patrol vehicle, the suspect kicked the officer in the face. The officer suffered minor abrasions to his knees and elbows during the scuffle and had to go to Mt. Graham Regional Medical Center to have his jaw examined. He was released the same day, and Cauthen reported he was in good health but sore.

Lawler continued to resist even as he was being booked into the jail and had to be placed in a restraint chair. He allegedly cursed at the officers numerous times and alluded that he would sexually assault one of the officer’s wife as payback for taking him into custody.

While at the jail, a pair of knives and a butane torch were found in Lawler’s possession. The find added a charge of promoting prison contraband on top of charges of aggravated assault on a police officer and resisting arrest.