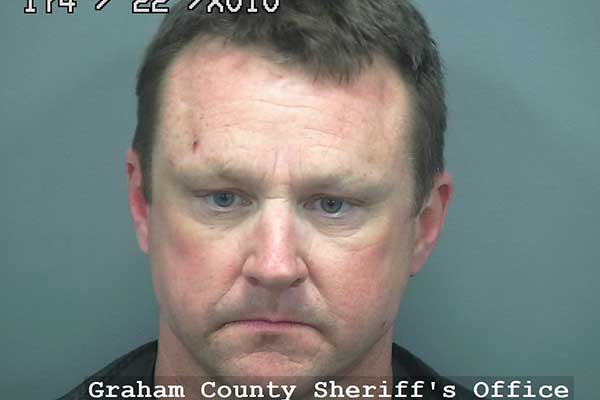 Two Safford police officers on patrol last Thursday morning near a trailer park in Thatcher, encountered two men in the roadway speaking to each other. The officers recognized both men through prior police contact. One of the men, identified as Chad Christensen, was very erratic and animated while speaking to the other man and appeared to be under the influence of something.

When the officers pulled into the park, the two men approached their vehicle. Christensen told the officers that he was glad that they were driving through the park and if it wasn’t for the governor’s order, he would be evicting everybody. According to the police report, the area is known as a high crime area including drugs, drug related search warrants, fights, burglary, and foot pursuits. Christensen’s vehicle was parked nearby with the driver’s side door open, but the officers didn’t see him in the vehicle.

A couple of hours later, the officers were picking up lunch when they saw Christensen’s vehicle coming out of Howard’s Mobile Home Park. The vehicle came to a stop sign but didn’t stop behind the stop bar. The truck was also lifted and didn’t have splash guards.

Other officers arrived to assist, and Christensen was placed in handcuffs and secured in the back seat of a patrol vehicle. An ambulance was called to the scene to treat scrapes and cuts that were sustained in the scuffle.

Christensen admitted that he had taken several different kinds of medications. He told authorities that the medications were the reason for his erratic behavior. On a scale of 0-10 with 0 being totally normal, Christensen rated himself at 9.5.

Christensen gave consent to have his vehicle searched. Authorities found several different bottles of medication and a semiautomatic pistol in a safe in the center console.

Christensen was transported to the Safford police department where his blood was drawn for toxicology. While being transported to jail, Christensen apparently coughed and said that he had the Coronavirus. He claimed that the man he had been talking to earlier tested positive for COVID-19. He said that he had been up all night with the sweats and a cough. After jail officials were advised of Christensen’s comments, he was booked into the Graham County Jail.

Police followed up with the man Christensen claimed had the virus, but he denied the accusation and assured authorities that his health was fine.