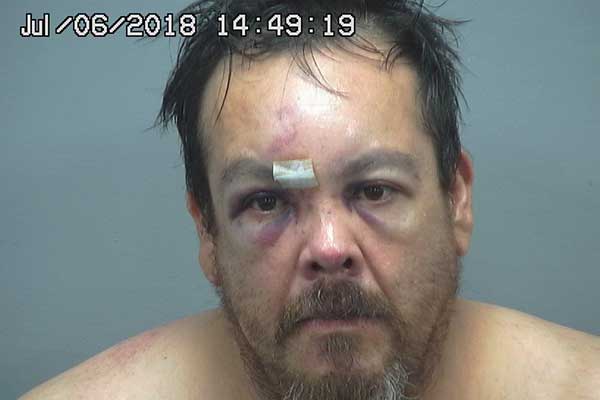 Graham County – On July 5that approximately 7:30 PM, Sheriff’s deputies responded to a report of suspicious activity in the area of Westridge Drive. While en route, deputies were advised that a fight was taking place at the residence with 2 juvenile males attacking an older male.

When the first deputy arrived on the scene he saw 3 men standing outside. An older man with a bloody face was yelling at the deputy to arrest his son. As other deputies arrived on the scene the parties were separated and interviewed. The prevailing story was that the older man, Robert Ordaz, had been drinking all day and had reportedly been harassing the other people at the residence. Finally Ordaz was asked to leave. He allegedly refused to leave unless he took a Sony Play Station with him that he had given his son.

A friend of the family who was reportedly living at the house took the gaming system outside and placed it in Ordaz’s car. The man told authorities that Ordaz had been calling him names and trying to provoke him into a fight. When the man placed the Play Station into the car, Ordaz reportedly threw a large cup of soda in the man’s face. Thinking Ordaz was going to attack him, the man punched Ordaz in the face.

Ordaz then allegedly grabbed the man by the throat and shirt and was threatening to kill him. The man punched Ordaz several more times in the head and face in an effort fight him off. Ordaz’s son and ex-wife broke up the fight.

Due to the statements of the other witnesses, deputies determined that Ordaz was at fault for the altercation and place him under arrest. Ordaz immediately became agitated and argued that he should not be arrested. It took two deputies to secure him in handcuffs. As one of the officers was conducting a search of Ordaz, he began jerking his arms and pulling away from the deputy. He refused orders to stop resisting. As the deputies were placing him in the back of the patrol car, he kicked one of the deputies, leaving a shoe print on the deputy’s vest.

Ordaz was transported to Mount Graham Regional Medical Center where he was treated for a fractured nose and checked for other head injuries. While at the hospital Ordaz reportedly made threats that he would kill the man he had fought with when he got out.

Ordaz was transported to the Graham County Jail where he was booked on charges of assault, aggravated assault and resisting arrest.