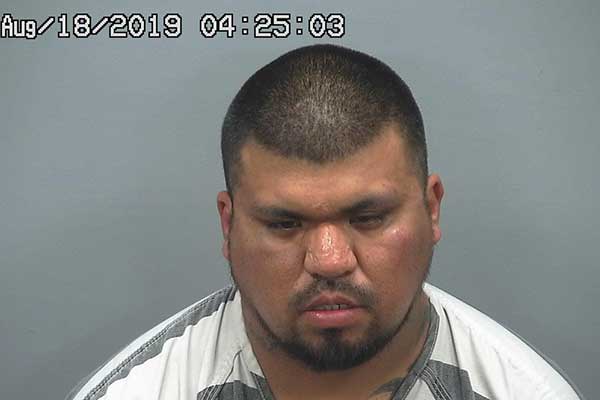 Safford police officers dealt with some unruly bar patrons last Sunday night, bouncing back and forth between the American Club and Shane’s Place. Officer first responded to reports of a fight in progress on Main Street at approximately 12:20 a.m. When police arrived there were patrons standing outside the bar but there was no visible altercation in progress. The bar maid told the officer that she had been busy and hadn’t seen anything. A man and woman stopped the officer as he was leaving and said that a man named Ric Sandoval had been in the bar and told people that he had a gun.

At approximately 1:15 a.m. Sunday morning, Safford officers were again dispatched to Shane’s Place because the Sandovals were trying to get back in. When the first officer arrived he was told that Sandoval had left and walked toward the American Club. The officer found Ric Sandoval outside the bar and told him that he would give him a ride home. Sandoval got in the back seat and the officer drove him to his residence.

Angel Sandoval was at the American Club when other officers arrived on the scene. Angel came out holding a beer but a bar employee took it from and told him he couldn’t leave the bar with it. Angel immediately became critical of the officers for taking away his brother away. An officer told him that the other officer was just giving Ric a ride home. Angel was reportedly extremely intoxicated and wouldn’t calm down.

An officer told Angel to leave the area, but he refused and continued yelling profanities at the officers. Angel began walking backward down the sidewalk facing the officers. As he was backing away, an officer saw Angel move his right arm towards his waist area. The movement caused the officer concern because of the earlier report that his brother had a firearm. Angel suddenly grabbed a gun from his waistband. As he raised the gun, however, he dropped it and it fell to the sidewalk and bounced about 2 feet away from him.

The officer yelled, “gun” as he rushed Sandoval and tackled him to the ground. A Thatcher police officer secured the gun and helped two Safford officers handcuff Sandoval with two sets of handcuffs.

An officer asked him if he thought that the cops might be alarmed if a gun was in someone’s hand. He replied that he didn’t do anything and they just started punching him for no reason.

Angel was arrested and booked in the Graham County Jail for Aggravated Assault. A criminal history check on Angel found that he had numerous felony and misdemeanor arrests. According to the police report he was found guilty in 2012 of aggravated assault with a deadly or dangerous weapon in Maricopa County where he was sentenced to 3 years of probation. However, his guilt was set aside, his conditions were suspended and his right to bear arms was restored. In 2016 he was found guilty of domestic violence and disorderly conduct. However, it appears that judgement was also set aside.