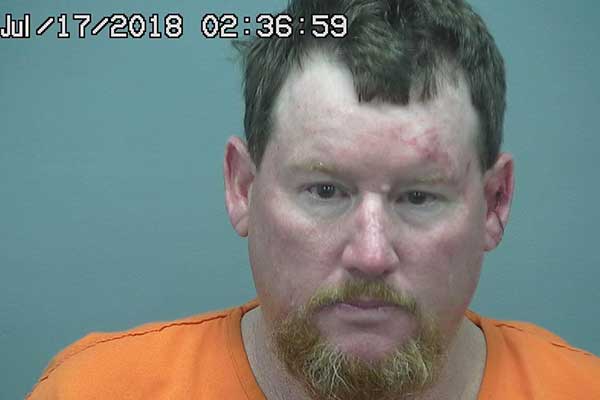 Safford – Police responded to a report of domestic violence Monday afternoon about 6:00 PM. Officers were alerted that there may be a firearm involved in the incident. According to the police report, seven police officers responded to the scene. Upon arrival they found a man outside the residence who appeared to be upset. He told police that the man inside the residence might have a firearm.

As authorities approached the door, they could hear a male voice inside the house yelling and cursing. A female was heard screaming. The man outside said that all the doors to the house were locked. Police were about to enter the house using a halligan entry tool – a device used to pry doors open – when a woman came out of the house through the garage door. The woman was holding a fabric case, which would later be found to contain a .38 caliber revolver.

Police yelled for the woman to get away from the house. As officers approached the garage door with weapons drawn, a man, later identified as Jeffrey Ferrin, opened the door and came out. Officers ordered the man to get on the ground and turn away, but Ferrin kept walking toward them. Two of the officers grabbed him, placed him on the ground and handcuffed him.

According to the police report, Ferrin was acting intoxicated and smelled of alcohol. Authorities conducted a security sweep of the residence. Nobody else was in the residence but it was noted that the living room TV was broken, a metal kitchen garbage can bent, garbage was strewn about the kitchen, and a small cabinet was in disarray in the living room.

Police questioned Ferrin about what had happened but the conversation was confusing due to his apparent intoxication. The other man at the residence said that Ferrin was supposed to pick him up from work but never showed up. When the man came home, he spoke to Ferrin about failing to pick him up from work. An altercation broke out when the man tried to take Ferrin’s alcohol bottle. Ferrin apparently tried to hit the man, but instead, the man struck him on his cheek.

Ferrin followed the man to the living room, grabbed his legs and took him to the ground. The man hit Ferrin in the head again, trying to get away. According to the man’s statement, Ferrin also threw a chair at him and missed, hitting the TV instead. The man managed to get out of the house and the woman arrived at the house, having been notified that a dispute was going on.

Ferrin apparently came out of the house to get into his vehicle to go get more alcohol. The woman tried to stop him, which started an argument. Ferrin allegedly put his hands on the woman and the man stepped in to stop it. At this point, Ferrin allegedly threatened to kill the man. The woman told police that she had retrieved the pistol to prevent Ferrin from getting it.

Ferrin was transported to the Graham County Jail and booked for domestic violence, and disorderly conduct.