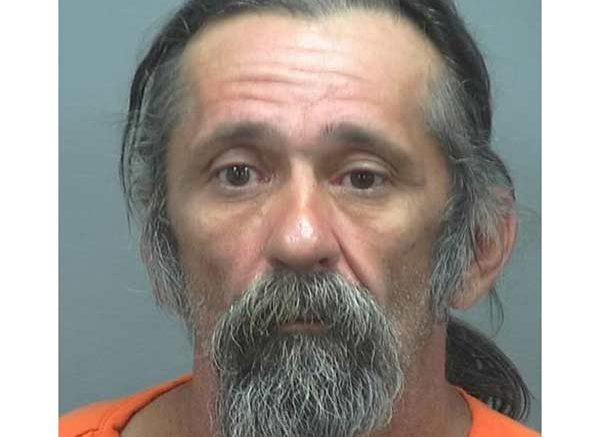 GRAHAM – Deputies were dispatched to Vista Road Wednesday in response to a domestic dispute. Responding officers were given a safety warning that the male subject involved has a history of gun violence. It was reported that he has been to prison for shooting another person.

When authorities arrived at the residence, a female was seen on the front porch crying and holding a white towel over her face. The white towel had a tint of red on it. The victim said she had a cut on the inside of her mouth.  When a Lifeline ambulance arrived, the victim denied medical attention. The victim told the deputy that Travis Hancock hit her in the face and took off on a green mountain bike but she did not know which direction. She wasn’t sure if his hand was open or closed when he hit her, she just remembered feeling dizzy afterwards.

The deputy asked the victim what the fight was over. She responded that it was because Hancock was taking food from the refrigerator that he bought her. The victim closed the door to the refrigerator on Hancock, he got mad and hit her.

The victim’s daughter was in the shower during the incident and when her mother came into the bathroom she saw her face bleeding. Her mother told her that Hancock “decked” her in the face.

Authorities asked the victim where Hancock stays most of the time, or where he might go.  She said that she knew him to be staying in the bushes on Cactus Road but his dad lives in Thunderbird. Deputies were familiar with the address from previous calls. Deputies left a message with the father to have Hancock contact them regarding the incident. Hancock returned the call to the deputy and later met with them. Hancock stated he and the victim had an argument but he left the residence on his bike. He reported that he didn’t hit the victim, but left so the argument would not escalate.  The deputy informed Hancock, he was under arrest and placed him in hand cuffs. While Hancock was in the back of the patrol vehicle, he began to have a seizure. The deputy called an ambulance for medical assistance. When Lifeline arrived, they cleared Hancock to be taken to jail. Hancock was transported and booked in the Graham County Jail.