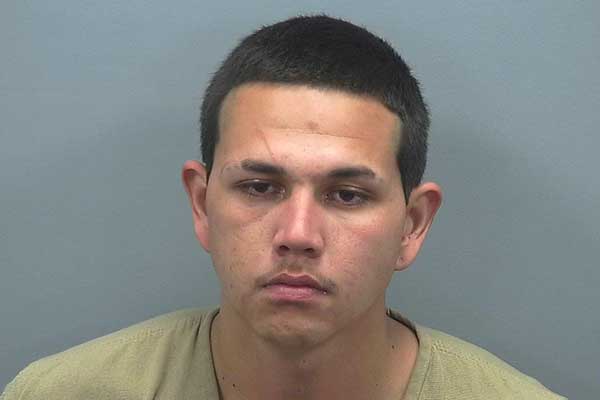 A Safford police officer was dispatched to investigate the report of a stolen vehicle last Sunday afternoon at approximately 1:30 p.m. When the officer arrived at the residence, the reporting party said that his white Chevy Cavalier was missing from the front of his residence. The owner said that he had last seen the vehicle an hour prior and that he had left the keys in the cup holder.

The officer entered the vehicle into the state database and put out an ATL for the car. After giving the owner a victim rights and stolen vehicle affidavit, the officer left.

At approximately 3:00 that afternoon, authorities were notified that the car owner’s daughter was following the stolen vehicle in the area of 12th Avenue and Yuma Circle. An officer was close by and began heading to Yuma Circle. At the walking path just south of Tucson Street and 12th Avenue, the officer saw a man, later identified as Trazarrah McCreary, walking quickly eastbound on the walking path – away from the location the stolen vehicle had last been spotted.

The officer continued toward Yuma Circle but did not find the vehicle. Dispatch then advised that the stolen vehicle had wrecked into a ditch at the dead end of 14th Avenue and that the occupants had fled on foot. Realizing that the man he saw on the walking path must be involved, the officer turned around and headed back in the direction he had seen McCreary walking, but was unable to locate him. Near that area, however, the officer saw a woman walking down the path in the same direction that McCreary had been walking.

The officer stopped to talk with the woman. Without provocation, the woman blurted out, “I had nothing to do with it!” The woman was apparently out of breath. The officer asked where her friend had gone, and she said that had had left the area running.

The woman told the officer that McCreary was driving the car and had picked her up in the vehicle that had wrecked on 14th Avenue. She said that she did not know the vehicle was stolen. The woman said the McCreary had picked her up and that the two of them had been riding for a few minutes when another woman came up behind them and was yelling at them to pull over. She said that McCreary continued to drive through neighborhoods until they came to the dead end of 14th Avenue. The woman in the other car (the daughter of the owner) had them cornered at the dead end. When they tried going around her, the two vehicles collided. McCreary apparently told his female passenger to run, before jumping out of the car and fleeing the scene.

The officer drove to the end of 14th Avenue where he was met by the car owner and his daughter. The daughter said that she was getting gas from Circle K on 1st Avenue when she saw her father’s car pass by on Relation Street. She followed the car to the Glenn Meadows area, where she tried to get McCreary to pull over. She said that she knew McCreary and recognized him as the driver.

She followed the car to the end of 14th Avenue where the two vehicles collided head on. McCreary then tried to make a U-Turn but ended up on the shoulder of the canal, nearly falling into the ditch. The owner’s daughter apparently opened the passenger door of the stolen vehicle, and sat of the female passenger while punching and slapping McCreary before he jumped out the car and ran.

Authorities found McCreary at a nearby residence. The person who answered the door initially told the officers that McCreary was not there, but soon admitted that he was inside the home. McCreary came out of the house and was taken into custody. While searching him police found him to be in possession of drug paraphernalia. McCreary was taken to the Safford Police station and the female passenger was released at the scene.

While being interviewed at the police station, McCreary initially said that a woman named Darlene had let him use the car. He said that he had a feeling it was stolen. He claimed that he had picked it up at Circle K on 1st Avenue and Relation Street. He said that the female passenger had called him for a ride. After he picked her up, he noticed a car following him but claimed that he didn’t know why, so he was trying to get away.

Later he changed his story and said that his female passenger had called him needing a ride and told him where he could get a car. He said that he knew it was a bad idea, but he was tired of walking. He told authorities that the female passenger told him that he could use the car, so he took it and picked her up. He stated that he knew that his driver’s license was suspended and that he had a feeling the car was stolen.

Trazarrah McCreary was booked into the Graham County Jail for Theft of Means of Transportation, Criminal Damage, and Possession of Drug Paraphernalia.