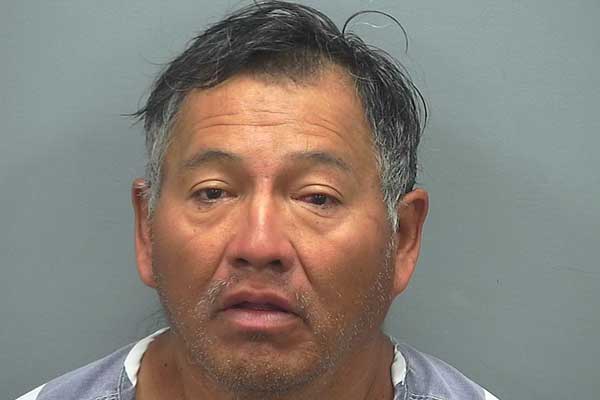 SAFFORD – Authorities were dispatched to the Valley Motel Saturday, May 25 at approximately 7:30 PM, in reference to a disturbance in one of the rooms. When an officer approached the room, a woman inside the room opened the door partially and the officer told her there were reports of a disturbance in the room. Crying could be heard coming from inside the room and the officer could see a woman lying on the floor with a man sitting next to her. The officer instructed the man, identified as Travis Goseyun, to leave the room.

The female victim was reportedly bleeding from her face and right ear. She was slumped over in a puddle of vomit. She appeared to have significant facial injuries. Her eyes were swollen shut and both cheek bones appeared to have trauma, with golf ball sized swelling. She told authorities that Goseyun had inflicted her injuries. Another officer arrived on the scene and requested an ambulance for the victim.

An officer spoke with Goseyun, who was reportedly uncooperative and highly intoxicated. The woman who had opened the door confirmed that Goseyun had assaulted the victim. Goseyun was arrested and placed in handcuffs but remained uncooperative. He accused the officers of racial discrimination.

Emergency medical personnel arrived on the scene and began assessing the victim and prepping her for transport to the emergency room for treatment. The woman who witnessed the assault told authorities that Goseyun had been drinking all day. The woman said that she came out of the bathroom and witnessed Goseyun striking the victim, grabbing her head and shoving it to the ground. The victim was apparently fighting back. The witness said she tried to intervene and stop the fighting. An officer asked the witness if she had called police and she said, “no.” He then asked if she called an ambulance after seeing the victim’s injuries and she said, “no, they do this all the time.”

Police interviewed the occupant of another room who said that he heard fighting and screaming coming from the room Goseyun occupied with the two women. The man stated that he could hear a man yelling and a female screaming, “help me, call the police.” He apparently did not call police out of fear of getting involved.

Goseyun was booked into the Graham County Jail on charges of Aggravated Assault and Disorderly Conduct.

At approximately 10:00 PM, the responding officers were notified that the victim had suffered two broken eye sockets, fractured cheek bones and blood clotting behind one eye. She was being transferred to a Tucson facility for her injuries and was unable to provide further statements regarding  the incident.