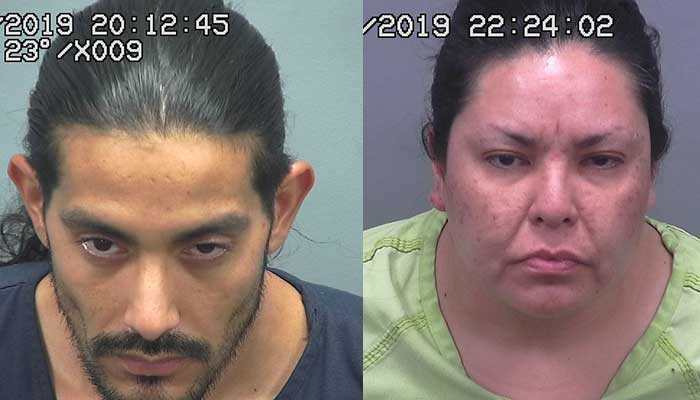 A Safford police officer on patrol on Monday, October 14, 2019 at approximately 2:30 p.m., was driving behind a white Chevy Tahoe. The Tahoe almost collided with a parked car on 8thAvenue and barely missed.

The officer pulled alongside the Tahoe at the intersection of 8thAvenue and 8thStreet and recognized the driver from previous contact as Manuel Rodriguez. A check of the vehicle’s license indicated that the insurance had been cancelled.

The vehicle headed west on 8thStreet and the officer activated his emergency lights and siren. The vehicle accelerated and turned south on 10thAvenue toward an elementary school that was just letting out. There were several pedestrians and vehicles in the area. According to the police report the Tahoe’s driving behavior was not prudent for the conditions. The vehicle turned left onto 10thAvenue and the officer lost sight of it.

He radioed to other units that the vehicle had failed to yield and gave the description and license number. While the officer continued to look for the vehicle, he was notified by another officer that some kids walking home from school had witnessed a man with long dark hair, throw a gun out of the car near the Safford library. The silver revolver was empty and did not have any live ammunition.

Rodriguez was found walking east on the railroad tracks by the library. Dispatch confirmed that he had a warrant. Due to the report of Rodriguez throwing a gun from the vehicle, the officer believed that he might have another weapon. The officer drew his weapon and ordered Rodriguez to put up his hands and sit on the ground. A detective arrived and helped handcuff Rodriguez.

Rodriguez was taken to the Safford Police Department for questioning. When asked why he tried to evade the officer, Rodriquez said that he knew he was driving on a suspended license and had a warrant for his arrest.

Rodriguez denied throwing the gun from the car and claimed that his female passenger, later identified as Dora Gandarilla, had thrown it. He did admit that his fingerprints and DNA would be on the gun, because it originally came from his house. Rodriquez acknowledged that he is a prohibited possessor of a firearm. The serial number on the gun had been filed off, which is also a misconduct involving weapons violation.

Other officers located the Tahoe Rodriguez had been driving parked on 5thAvenue near Main Street. The female passenger, Dora Gandarilla, was in the driver’s seat of the vehicle, which authorities had learned was registered to her. Due to the recovery of the firearm, officers approached the vehicle with weapons drawn and ordered Gandarilla out of the vehicle.

Gandarilla initially told authorities that she had been asleep in the passenger seat, then slid over to the driver’s seat to do her makeup. Later she admitted that she had been with Rodriguez when he tried running from authorities. After changing her story several times, she said that Rodriguez had thrown the gun from the car.

A search of the vehicle turned up heroin, methamphetamine and other drugs. While searching the vehicle and the area, police were notified that there was video footage of Gandarilla throwing something down a basement access near her parked vehicle. Authorities managed to retrieve some of the items from the access portal but were later given access to the basement by the building owner where they were able to retrieve more drug-related items.

Gandarilla is on probation and was turned over to probation officers before being booked into the Graham County Jail. In addition to probation violations, she’s facing charges of misconduct involving weapons, endangerment, and possession of a narcotic drug.

Rodriguez was also booked into the Graham County Jail and is facing charges of misconduct involving weapons, unlawful flight from law enforcement, endangerment and driving on a suspended license.