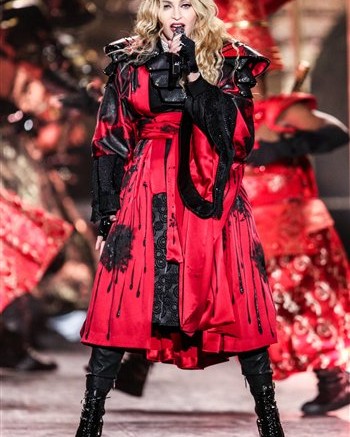 Madonna performs at the opening night of her Rebel Heart Tour at the Bell Center on Wednesday, Sept. 9, 2015, in Montreal, Quebec. (Photo by Rich Fury/Invision/AP)

The pop star kicked off her “Rebel Heart” tour in Montreal on Wednesday night, belting out a mix of her iconic hits and new music from her recently released album, also titled, “Rebel Heart.”

She even performed “Material Girl” for the first time since 1990’s “Blond Ambition” tour.

DJ and producer Diplo warmed up the crowd with an hour-long set.

The show opened with a video featuring Mike Tyson, Chance the Rapper and Madonna, where she addressed topics ranging from censorship to dictatorship.

She then descended to the stage in a cage.

Madonna wasted no time getting to fan favorites including “Burning Up” and a mash-up of “Holy Water” with “Vogue.” She then pulled a classic move and ripped off her skirt to reveal a barely there nun’s outfit and started to pole dance.

She then used one of her dancers, also dressed as a nun, to ride like a surfboard. Dancers then lined the stage to recreate the Last Supper, with Madonna as the main course.

The biggest standing ovation came during her rendition of the French classic “La Vie en Rose.” The audience went wild and sang along. They didn’t seem to mind when she flubbed a line. Madonna later joked that her French isn’t the best.

She also joked about her marriages. “Who wants to get hitched? Anybody want to get married? Sucker? It’s downhill from here.” She later followed up with: “In spite of all of that heartbreak, pain and suffering, I wouldn’t trade love for anything.”

After performing for nearly two hours, and changing into countless outfits designed by Miuccia Prada, Jeremy Scott and Alexander Wang, among others, Madonna ended the concert with a crowd favorite.

Draped in a Canadian flag, she had nearly everyone on their feet dancing to “Holiday.”

The tour is set to wrap in Australia in March 2016.