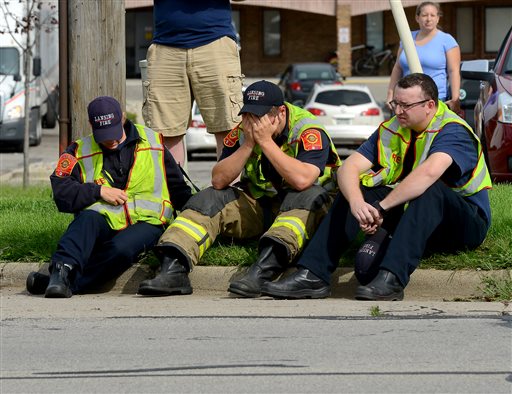 A firefighter puts his head in his hands as he and other firefighters sit on the curb on Cedar Street just north of Jolly Road Wednesday, Sept. 9, 2015 in Lansing, Mich. Dennis Rodeman, a 35-year-old Lansing firefighter has died after being struck by a hit-and-run driver as he collected money for charity. (Dave Wasinger/Lansing State Journal via AP) NO SALES; MANDATORY CREDIT

LANSING, Mich. (AP) — Police in Michigan have arrested the driver of a pickup truck who they believe intentionally struck a firefighter standing in a roadway collecting money for charity, killing him.

The 35-year-old Rodeman, who also served in the U.S. Marines in Iraq, according to the mayor, was struck about 3:40 p.m. He and other firefighters were participating in an annual fundraising campaign for the Muscular Dystrophy Association and the International Association of Fire Fighters, authorities said.

Rodeman was married two months ago, and he and his wife were expecting their first child, Fire Chief Randy Talifarro said.

“The suspect came by, was upset for whatever reason (and) circled back around” before striking the firefighter, Kraus said. “The preliminary investigation is that he deliberately hit the firefighter.”

Rodeman was wearing a reflective vest and other gear and was standing in the road’s center turning lane.

Tionna Davis told the newspaper she was driving in the area and saw the pickup swerve from one lane to another before Rodeman was struck.

“He literally tried to hit him,” she said.

The truck fled the scene, authorities said. The driver eventually stopped the vehicle and fled on foot, but police officers caught him. The 22-year-old suspect’s name wasn’t immediately released.

Prosecutors could file charges Thursday. Police Chief Michael Yankowski said the suspect was being held on suspicion of murder and felony fleeing and eluding.

He described the fireman as a highly regarded colleague with an “unblemished” work record.

“He was a joy to work around,” Talifarro said.