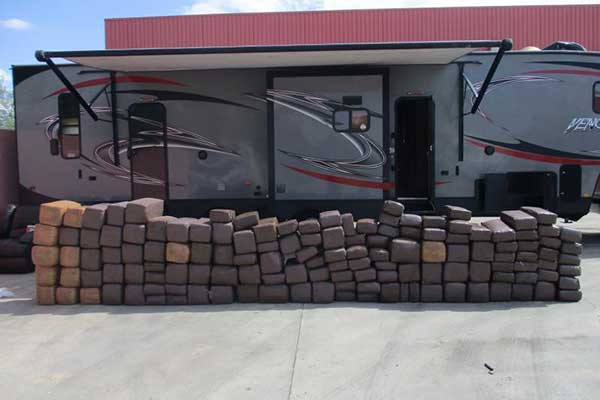 TUCSON, Ariz. – U.S. Customs and Border Protection, Office of Field Operations, officers at Arizona’s Port of Lukeville arrested an Arizona pair after seizing more than 1,600 pounds of marijuana on Wednesday.

Officers referred a 42-year-old Mesa man and his 29-year-old Mexican female passenger for a secondary inspection of his GMC truck and travel trailer as they applied to enter the United States from Mexico Wednesday morning. A CBP narcotics detection canine alerted to a scent it is trained to detect, leading officers to remove 135 packages of marijuana from the floor of the vehicle. The drugs were identified as almost 1,614 pounds of marijuana, worth more than $484,000.

Officers arrested both subjects and turned them over to U.S. Immigration and Customs Enforcement’s Homeland Security Investigations, while the drugs and the truck/travel trailer were seized.