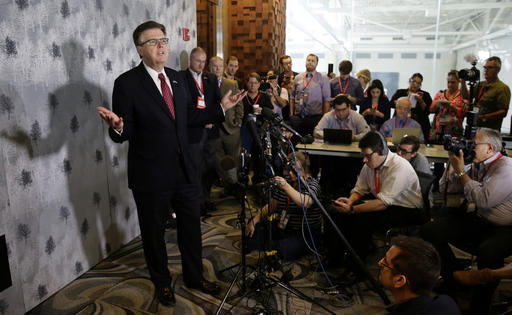 Texas Lt. Gov. Dan Patrick speaks during a news conference at the Texas Republican Convention Friday, May 13, 2016, in Dallas. Texas is signaling the state it will challenge an Obama administrative directive over bathroom access for transgender students in public schools. (AP Photo/LM Otero)

DALLAS (AP) — Texas’ lieutenant governor said Friday that the state is prepared to forfeit billions of federal dollars in public school funding in defiance of an Obama administration directive requiring schools to allow transgender students to use bathrooms and locker rooms consistent with their chosen gender identity.

The new directive is expected to worsen tensions between Republican-led statehouses and the federal government over divisive social issues. It clarifies expectations for districts receiving federal school funds, which Texas’ powerful Republican lieutenant governor argues the state’s 5.2 million public school students can now do without.

“We will not be blackmailed by the president’s 30 pieces of silver,” Lt. Gov. Dan Patrick said. “The people of Texas and the Legislature will find a way to find as much of that money as we can if we are forced to.”

Patrick said Texas currently receives about $10 billion in federal education funding. He didn’t say how that money would be replaced, and his remarks on Friday came only moments after more than half the state’s 1,200 school districts lost a major lawsuit that claimed Texas unconstitutionally underfunds public schools.

The risk of not accommodating transgender students and losing federal school funds alarmed others. In Georgia on Thursday night, the Fannin County school superintendent said transgendered people are protected under the Civil Rights Act and surrendering $3 million in annual federal funding to avoid the issue isn’t an option.

Texas’ attorney general suggested that the guidelines would result in “yet another legal fight” over transgender bathroom access. Just this week, Texas joined a lawsuit in Virginia over transgender students using the bathrooms of their choice and signaled that the Fort Worth school district, which is Texas’ sixth-largest, illegally adopted policies recently that give the district latitude to not tell parents information shared by their transgender children.

U.S. Attorney General Loretta Lynch said “there is no room in our schools for discrimination” and was sending the directive Friday to school districts. Some told her not to bother.

“When I get that letter I’ll throw it away,” Rodney Cavness, the superintendent of the small Port Neches-Groves school district in southeastern Texas, told Beaumont television station KFDM.

Under the guidance, schools have been told that they must treat transgender students according to their chosen gender identity as soon as a parent or guardian notifies the district that that identity “differs from previous representations or records.” There is no obligation for a student to present a specific medical diagnosis or identification documents that reflect his or her gender identity, and equal access must be given to transgender students even in instances when it makes others uncomfortable, according to the directive.

Texas Gov. Greg Abbott has staunchly rejected issues over gay and transgender rights that the Obama administration has cast in terms of civil rights. Patrick responded to Friday’s directive at the Texas Republican Party Convention, where delegates this week are considering a new state party platform that says “homosexuality must not be accepted as an acceptable alternative lifestyle.”