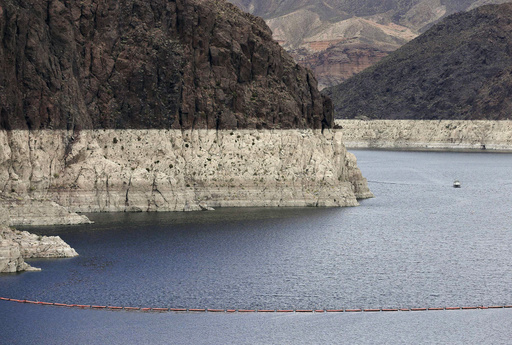 FILE – In this April 16, 2013 file photo, a "bathtub ring" marks the high water mark as a recreational boat approaches Hoover Dam along Black Canyon on Lake Mead, the largest Colorado River reservoir, near Boulder City, Nev. Scientists say global warming may already be shrinking the Colorado River and could reduce its flow by more than a third by the end of the century. (AP Photo/Julie Jacobson, File)

PHOENIX — United States Bureau of Reclamation Commissioner Brenda Burman today joined representatives from Arizona, six other western states and Mexico at the Hoover Dam to sign the Colorado River Drought Contingency Plan (DCP), finalizing the interstate agreement to conserve water in the Colorado River and Lake Mead. The signing represents the completion of the agreement, which is the result of years of collaboration among stakeholders in Arizona and across the country and represents the most significant water legislation in the past forty years.

“Today’s signing is a victory for all Arizonans — and it should be looked to as a model for how to achieve the really big things,” said Governor Ducey. “This historic effort brought people together from all sides — rural, urban, agriculture, industry, tribal communities, non-profits, cities, Democrats and Republicans. It involved input from multiple states and two countries and passage in both the state legislature and Congress. And we did it by putting party labels aside and putting people first. There’s a lot of credit to go around, and my thanks to everyone who worked to make this day possible. With DCP as the example, Arizona will continue to be a leader in doing the things that matter.”

Facing a 19-year drought, Arizona along with six other western states and Mexico were tasked with developing a plan by January 31, 2019, to conserve more water in Lake Mead, from which Arizona gets nearly 40 percent of its water. Since July of 2018, 40 stakeholders representing diverse interests from across Arizona worked to develop our state’s Drought Contingency Plan. The plan balances water reductions in the state to ensure no one user takes the brunt.

For more information on the Drought Contingency Plan, click HERE.