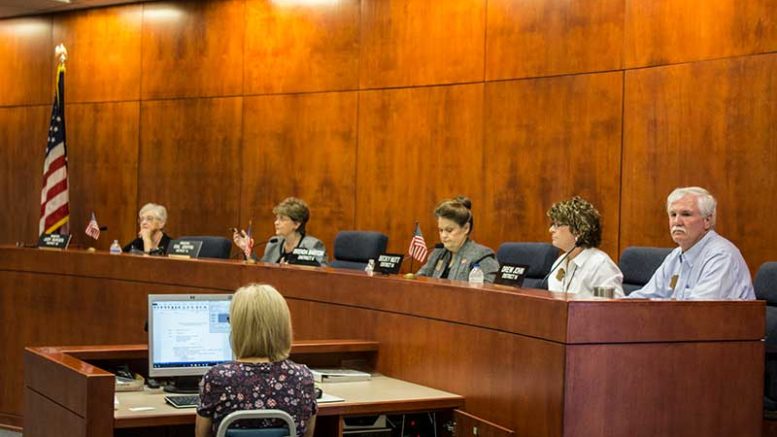 SAFFORD – Wildfires seem to be unavoidable and locals are demanding change.

Allred told those in attendance that he knew the majority of the ranchers and farmers in Graham County and that he would feel comfortable walking into all of their homes. Also, Allred boasted knowledge of the land that accompanies many years on the job. He said there were few security incidents related to the recent Frye Fire.

“There were a couple incidents that did take place with this fire,” Allred said. “There was a road closure where one of our citizens got stopped because one of our citizens went around a sign that said something to the effect of road closed ahead. There was a state employee along with a federal employee and they almost got into a pursuit with this guy, the guy shuts down and they stopped and talked. And after the stop had been made and was there for a while, I drove up on it and one of the guys said ‘well I’m from out of here. I don’t live here. Will one of you guys write him a citation?’ I said for what and why?”

Later, Allred said that he did not write up the citation for the citizen because they were traveling around a back way to a community that lives near Frye Mesa Road. Because the state and federal employees didn’t know the layout of the community, they were going to give a citation to the citizen. Allred stressed the need for better communication between whatever state and federal security agencies that may accompany any fire.

Jay Whetten was the first to testify on behalf of the local citizens of Graham and Cochise counties. Whetten told those in attending that he believes wildfires could only be properly fought if the out-of-state firefighters are willing to work with the locals in planning and fire tactics.

“I believe that in order to best fight a fire, you have to use some of the best local people,” Whetten said. “Decisions have to be made quickly. Outsiders come in and make those decisions.”

Steve Smith, a rancher from Cochise County, said that once the fire crews were called in, all local involvement and on-site viewing was completely discouraged.

“They didn’t want us anywhere around,” Smith said. “I was told to leave. This fire started really small. I was told it had one tanker dropped on it and it was called off because I was told we couldn’t afford it.”

Smith also said that the firefighters had no intention of putting out the fire because the longer the fire lasts, the more money is to be made. Also, Smith said that the fire crews had very little to no respect for the ranchers, or their cattle. When Smith moved his cattle to a safe enclosure with water, both gates were later left open by fire crews.

“The money thing is a problem,” Smith said. “There is money to be made in this. There is a lack of respect for the local people. It was as if the locals did not exist.”

Graham County Supervisor Paul David stood up as a concerned cabin owner on Mount Graham. David said that it was unjust that ADOT had closed off the mountain to the community and still let telescope and forestry service personnel through.

After listening to roughly two hours of local citizen testimonies, Drew John and Brenda Barton thanked those in attendance for coming and for those who testified for their presentations. John told attendees that he intended to influence the situation through a trickle down effect from Washington.

“We’re going to bring local control back,” John said. “Thank you all for being here.”

The meeting was a standing room-only event. The goal of the hearing was so that Griffin and Barton could take a close look at forest fires in rural Arizona and hear from local citizens about the impact of wildfires in their communities.