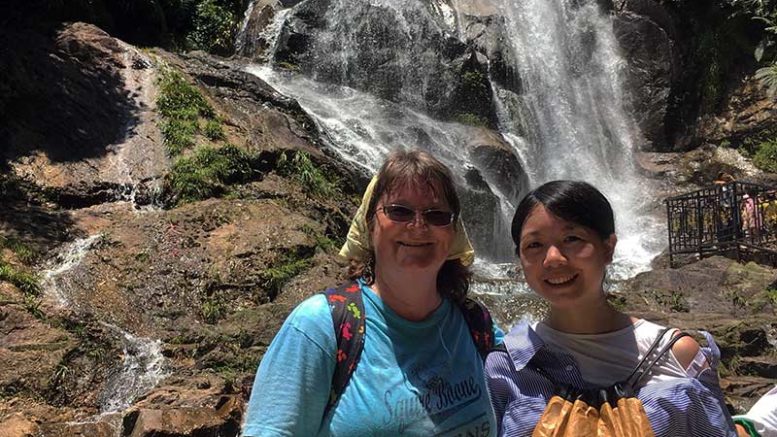 Contributed Photo Courtesy of Kathy Scoggin: Kathy Scoggin (on left) and her aid Emma stand beside a waterfall called, "The Queen of Heaven".

THATCHER – Sometimes people get wander lust, but Thatcher elementary school teacher Kathy Scoggin got a once in a lifetime experience instead.

Without receiving any monetary compensation for her time, Thatcher teacher Kathy Scoggin decided to travel to the Sub-provincial city of Guangzhou in the People’s Republic of China to teach basic English skills. Having just returned from her trip at the end of July, Scoggin was willing to share the story of her adventure with Gila Valley Central.

Initially, her daughter was going to go, but when another teacher dropped out Scoggin was able to sign up at the last minute to go as well. Working with the Cliffords School International, she was assigned three weeks of educational time. The school was established so that the native Chinese children could learn English while mixing Chinese and American culture and language skills. However, the Clifford’s International School is a charter school where children have to show a certain level of academic success to be enrolled. Scoggin’s role was to teach a summer course for students who hope to test into the school and show that their grades are high enough to be accepted into the program.

Contributed Photo Courtesy of Kathy Scoggin: Scoggin’s students were outside learning about magnifying glasses when this picture was taken.

The school is located in a gated and guarded village, as Scoggin called it, containing 100,000 people. An economic system all its own, the village contains high-rise apartment buildings and shopping centers. Every individual has a job and place in the inner workings of the village.

Scoggin was told to come with lesson plans suitable for the second grade. Nevertheless, she told Gila Valley Central that when she arrived at the school, she was told that she would have to scrap her plans and begin with the basics.

“The parents were working really hard so that their children could at least know the alphabet and a few simple phrases. And that was their start. I had a lesson plan that my teacher’s aid at one point said, they don’t know that, go back to the basics. So I had to pull from my magic hat of things that I had done from here in the lower grades,” Scoggin said. 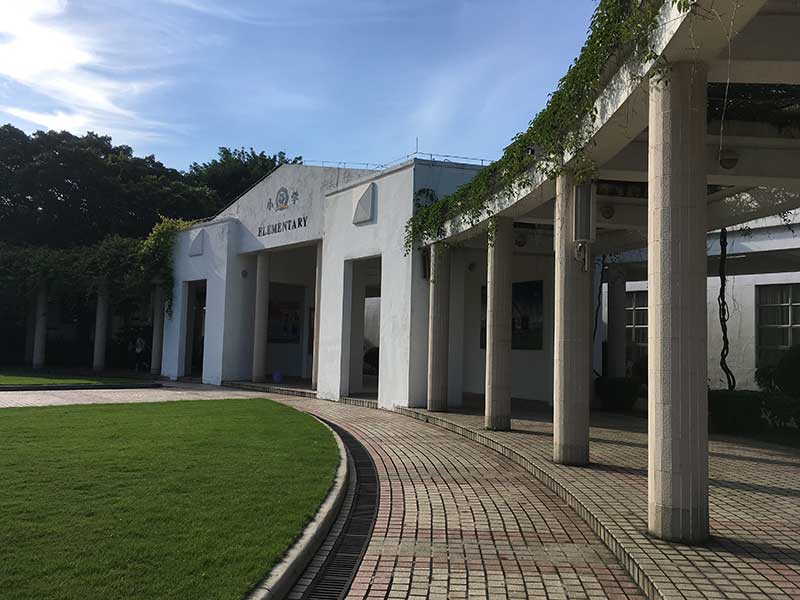 Contributed Photo Courtesy of Kathy Scoggin: This is a photo of the Cliffords School International, where Scoggin taught for three weeks.

Scoggin told Gila Valley Central that she taught the children their basic numbers and the English alphabet. However, what she found to be particularly rewarding was to close the distance between the worlds of China and America.

“We talked about pets and family members, and I showed them what it was like in America for families, and it all seemed to the same. The kids said, yeah I have pets, yeah I have parents. So they kind of understood that America and China are the same in most fashions, it’s just that we look different. They don’t know much about America except for what is posed to them by the government, so it was nice for them to realize that we were just like them.”

This message of acceptance and unity is something that Scoggin is planning to bring back with her to classes for years to come. Scoggin told Gila Valley Central that she intends to tell her students that even though they may look different from the children from around the world, in many ways they are the same.

“I’m going to tell the kids in my classroom we’re just like them, it’s just we look different,” Scoggin said. “I want to bring back (to the Gila Valley) that the world is big but it’s not that big. We can have a worldwide society where we appreciate and support one another and not be afraid of each other. Children are precious no matter what color their skin or where they are from.” 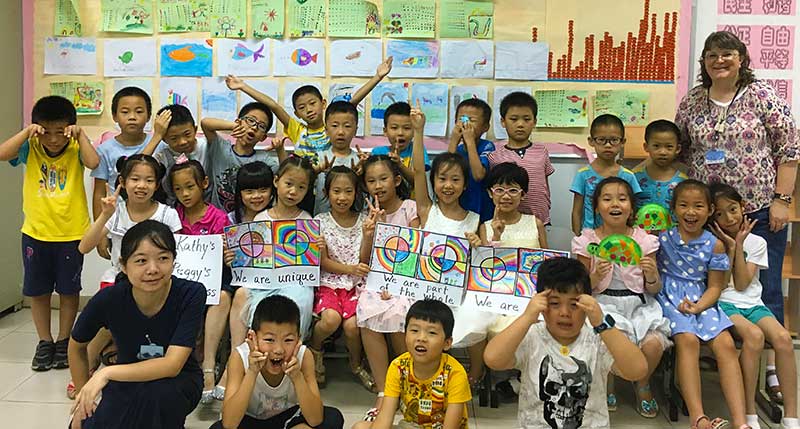 Contributed Photo Courtesy of Kathy Scoggin: This photo is of Scoggins’ class, with her aide Emma on the left and Scoggin in the rear on the right.

Although Scoggin and her daughter were traveling by themselves and living in a gated area with security, Scoggin said she felt safe during her experience.

“You have to have a badge and a pass to get into the village. It was very secure, I felt very safe. It was beautiful,” Scoggin said. “Everything was immaculate and beautiful and elegant.”

Scoggin told Gila Valley Central that she loved teaching the children and that she is still in awe that she was given this once in a lifetime opportunity. Also, Scoggin said that multiple teachers have dropped out of the program and that there may be openings again next summer. Of course, individuals interested in teaching must have the required degree and must be willing to go through the application process to apply for summer teaching.