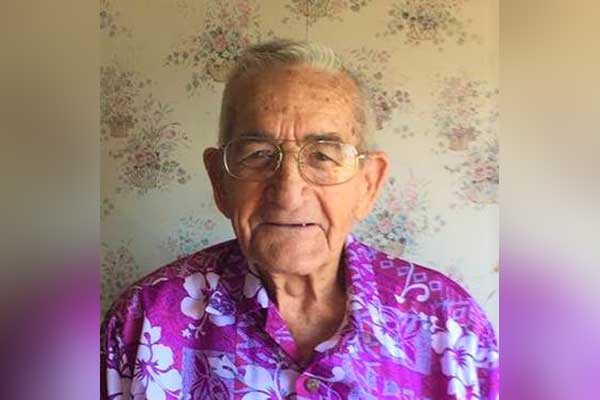 Leslie Lavar Johnston, 94, passed away peacefully on Thursday, August 5th, 2021 in Chandler, Arizona at the home of his great-granddaughter.

Lavar was born on October 30th, 1926 in Bryce, Arizona, to Leslie and Zara Lamaroux Johnston. As a child, he loved riding horses and swimming in the Gila River. Coming of age during World War II, he enlisted in the US Navy as soon as he was able. He warmly recalled working alongside actor Gene Kelly during boot camp in San Diego. For the duration of the war, Lavar served in the South Pacific and Japan as a signalman aboard the USS Gardoqui.

After the war, he attended Arizona State University where he earned a degree in business. He worked as a Deputy Sheriff for Maricopa County, later serving seven years as an Arizona Highway Patrolman based in Fredonia, Arizona.

Because of his horse riding skills, he had the opportunity to be an extra in several western movies filmed in southern Utah and northern Arizona. He was particularly proud of his work in the 1956 production of The Lone Ranger.

Seeking a career change, Lavar returned to school, working nights as a patrolman while he earned his Master’s Degree in Education and an elementary teacher certification. With his young family, he moved to Fruita, Colorado, where he managed a fifty-acre farm, taught fourth grade for twenty years, and worked as a park ranger at the Colorado National Monument.

Upon his retirement, he returned to Pima, Arizona. He enjoyed living his later years in the place where he grew up. Lavar was passionate about dancing, especially square dancing. He started several dancing clubs, including the Arizona Strippers Square Dance Club in Fredonia. He also loved watching local high school sports. He was a committed fan of the Pima High School basketball and football teams.

His family will remember his fondness for horses, his preference for the color purple, his adorable cartoon illustrations, his laugh, and most importantly, his love.

He is preceded in death by an infant son Lyndon Johnston, his parents Leslie and Zara Johnston, sisters Lois, Edris, and Nadine, and brothers Eugene and Coy.

Interment will follow in the Glenbar Cemetery with Military honors by the Gila Valley Honor Guard.

Online condolence may be extended at www.caldwellfuneralchapel.com